Some of them want you to hit them baby, one more time 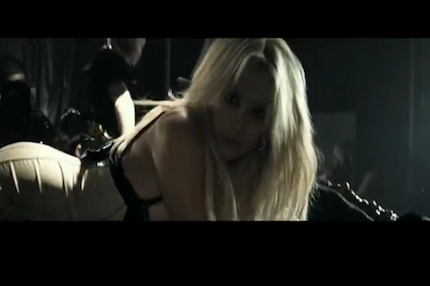 Parents whose tweens helped send …Baby One More Time double platinum in only two months way back in 1999 probably thought Britney Spears and Marilyn Manson were polar opposites. For those of us with the benefit of hindsight, though, the bubblegum-pop virgin and the creepiest celeb had a lot more in common than meets the eye. And now there’s further evidence of a connection: a newly surfaced video that shows Spears and a masked coterie dancing provocatively to Manson’s breakthrough 1995 cover of the Eurythmics’ “Sweet Dreams (Are Made of This).”

According to Buzzfeed (via Flavorwire), Spears used the clip as an interlude on her Circus tour a couple of years ago, but it has only just hit the Web. It’s pretty steamy, Eyes Wide Shut-echoing stuff — the vaguely sadomasochistic undercurrent of “…Baby One More Time” brought to the foreground and all grown up, as in Spears’ video for the cheekily titled “If U Seek Amy.” And, as with a lot of what Spears and Manson did in their respective primes, it’s hard to look away. Come to think of it, a tour pairing these two glammed-up controversy magnets would be a pretty compelling proposition. Just tell your parents you’re spending the night at a friend’s house.