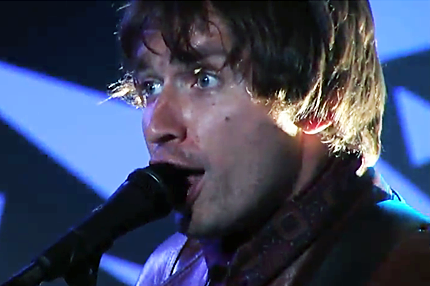 Don’t look now, but Peter Bjorn and John are inconspicuously proving themselves wrong. Tuesday night on Jimmy Kimmel Live!, the Swedish indie-poppers put on their rock’n’roll jackets for “Second Chance,” the hyper-catchy standout from this year’s Gimme Some. “You can’t, can’t count on a second chance,” a breathless Peter Morén spat between spastic dance moves, but then, here they were — the guys who once whistled their way to an international hit with 2006’s terminally winsome “Young Folks” — back on national TV, with the often-staid Kimmel audience whooping and clapping along.

Wondering why that herky-jerk melody seems eerily familiar? Then feast your eyes on those Bud Light banners. If commercial breaks had pop charts, “Second Chance” would have been burning them up for months now, appearing in a TV spot for the ubiquitous brew. Still, a world where Kanye West can drop Watch the Throne and then drop by Occupy Wall Street is a world long past caring about how successful artists make their (sometimes enviable) living, isn’t it? And besides, check out Morén’s windmilling, leaping guitar solo. It’s just too bad they couldn’t get Kimmel up there to handle cowbell duties:

Elsewhere on late-night TV, upstate New York baroque-poppers Ra Ra Riot hit Late Night With Jimmy Fallon. Keep your eyes on the show’s website for the official video, which could be posted by the time you read this.