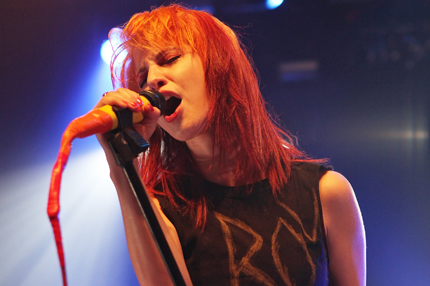 Paramore are anxious to feed fans fresh music — on vinyl, no less. The Nashville three-piece have announced a singles club that’ll kick off with three new songs and one previously released track before the end of 2011.

The list includes “Hello Cold World,” which Paramore say “should be completely brand-spankin’ new to all of you,” the blistering “Renegade,” which the band performed last month at Fueled by Ramen’s 15th birthday bash in New York City, and “In the Mourning,” which the trio performed as a “Landslide”-ish country-folk tune in an acoustic version earlier this year. The group’s slow-burning Transformers: Dark of the Moon soundtrack contribution “Monster” will also make the cut, fulfilling the official “Monster” quota.

Prices run from $2.99 to $54.99 for four singles-club membership options, which range from digital singles alone to a package that also includes a limited-edition 7″ box set and T-shirt. The songs will be among the first Paramore has released since the exits of founding members Josh and Zac Farro almost a year ago. Just think: Here’s your chance to join the same club as Taylor Swift… um, potentially.

Check out an acoustic version of “In the Mourning”: