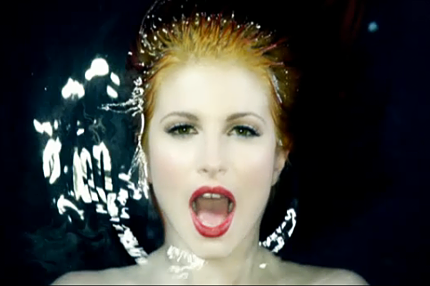 Paramore just released the video for “Monster,” their first track since the departure of founding members Josh and Zac Farro last December, and it appears the split has only fueled Hayley Williams’ fire.

The song, which dropped in June on the Transformers: Dark of the Moon soundtrack, is a blistering attack seemingly aimed at the Farros; it’s hard to interpret verses like “Now that you’re gone the world is ours” any other way. And the video is just as intense.

Williams and the two other remaining original members, guitarist Taylor York and bassist Jeremy Davis, frantically run through an abandoned hospital, past electric beds, IV bags, EKG machines, and linoleum-floored waiting rooms scattered with medical records. Meanwhile, in another small hidden room, a different (and angrier) version of the trio rock out, punching walls and stomping floors that shake the building to its foundation.

Paramore are currently playing a few dates on the Vans Warped Tour, and will be one of the headliners this September when their label, Fueled By Ramen, celebrates its 15th anniversary over three nights in NYC.