The Toronto R&B phenom puts his sultry-yet-creepy spin on "Shake It Out," from the British band's upcoming sophomore album. 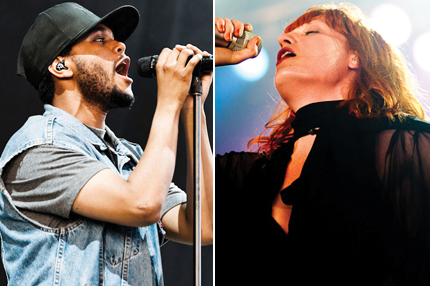 Hear It: Florence and the Machine, “Shake It Out (The Weeknd Remix)”

“It’s always darkest before the dawn,” British belter Florence Welch sings on “Shake It Out,” and that’s a theme the Weeknd’s Abel Tesfaye ably explores here. The original version of the song, set to appear on the follow-up to last year’s Lungs, puts Welch’s rousing vocals over stirring organ and dramatic drums that suggest a religious fervor. Tesfaye converts the sacred into the profane, warping Welch’s distinctly pure voice and surrounding it with his signature goth-R&B slither. “It’s hard to dance with the devil on your back,” indeed.

“Shake It Out,” along with the Weeknd’s remix and additional reworkings by DJ Benny Benassi, will be available from iTunes UK on October 2, though there’s no information on a U.S. release just yet. According to iTunes UK, the second album from Florence and the Machine will be called Ceremonials, and it will be out in Britain on October 31. Florence + the Machine were among SPIN’s 2010 Artists of the Year.

The Weeknd’s Tesfaye has created an air of mystery around himself with free mixtapes like last month’s Thursday, but next week he’ll be hitting the road. As the Siouxsie & the Banshees-sampling Drake pal revealed yesterday, the Weeknd will play in Guelph, Ontario, on October 1 and in London, Ontario, on October 2.