U.K. singer Florence Welch and her band the Machine have unveiled "Shake It Out," to appear on second LP 'Ceremonials.' 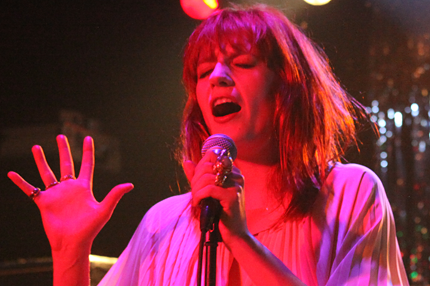 Powerhouse British vocalist Florence Welch and her band the Machine, one of SPIN’s 2010 Artists of the Year, have offered up a second taste of their second album, which follows last year’s Lungs. Check out “Shake It Out” here.

Florence and the Machine, “Shake It Out”

In keeping with previously unveiled track “What the Water Gave Me,” the four-and-a-half-minute song is swelling, gospel-flavored pop, with churchy organ and pounding drums setting a cathartic scene for Welch’s fiery singing. “It’s hard to dance with the devil on your back,” she roars. “So shake him off!”

Florence and the Machine have also provided details on their new album. According to iTunes UK, the LP will be called Ceremonials, and it will be out in Britain on October 31, which typically means a U.S. release a day later.

As previously reported, the band worked on the album at London’s famed Abbey Road Studios with producer Paul Epworth (Adele, Bloc Party). Epworth was also behind the boards on Lungs’ “Cosmic Love” and “Blinding.” The full Ceremonials tracklist is below.