Artist of the Year: Florence and the Machine

Home » Features » Cover Story » Artist of the Year: Florence and the Machine

Florence Welch thought she’d be spending much of the year at home. Instead, she toured relentlessly as her record — and her reputation — blew up. [Magazine Excerpt]

Two days before Halloween, Florence Welch is game for mischief. She’s driving through the crowded streets of New Orleans’ French Quarter in a borrowed ’94 Cadillac containing a gun that isn’t registered to anyone currently in the car.

Technically, the British songstress’ publicist is behind the wheel, though both the vehicle and the firearm belong to C.C. Adcock, a local swamp-rock fixture and True Blood soundtrack contributor who, just moments before, had been helping Welch and her band the Machine record a brassy version of Buddy Holly’s “Not Fade Away” for an upcoming album tribute to the late singer. As Dr. John blasts from the radio, members of the Machine jokingly wonder if tomorrow’s headlines will read: FLORENCE WELCH ARRESTED FOR ILLEGAL WEAPON POSSESSION. But Welch is more preoccupied with a crime she committed earlier in the day. “What are the ramifications of breaking into a cemetery?” she wonders.

For Welch, the journey to casual scofflaw was a long one. A year ago, she was just another talented singer-songwriter tiptoeing out of England, similar to fellow native Natasha Khan of Bat for Lashes in both persona (gentle, eccentric) and influences (Kate Bush, Stevie Nicks). Though Welch had only recently released her debut album, Lungs, in July 2009, she was already worn out from having been on the road promoting many of its songs since early 2008. 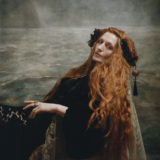 Back then, she consoled herself with a single thought: Once the band wrapped a tour in April 2010, pushed through a few summer festivals and Australian dates, she would finally take a much-needed rest in September.

“That didn’t really happen,” says Welch the day after her joyride. In fact, when the month of her overdue vacation rolled around, she was instead at the MTV Video Music Awards, hanging out in Kanye West’s dressing room, wiping meat juice from Lady Gaga’s outfit off of her hands. “But I’m kind of okay with that.”

February 16:She’s Got the Love
The first sign that Welch wasn’t going to be able to take time off came last February. After weeks at the top of the U.K. chart, Lungs, an intensely theatrical collection of songs about one-eyed girls and coffin builders, empowered by Welch’s feverish vocals, won best album at the annual Brit Awards. “That was a big moment for us,” she says. “You don’t create music to win awards, but it is very nice when it happens.”

Welch is sitting in her tent backstage at the Voodoo Festival, having just dashed across the grounds of NOLA’s City Park to escape an excited mob of teen girls who might have otherwise spent their Saturday debating the merits of Team Edward versus Team Jacob. This fan base was no doubt incited by the inclusion of Florence and the Machine’s broody “Heavy in Your Arms” on the soundtrack to The Twilight Saga: Eclipse but also her own album’s romantic, if lovelorn, mood: She recorded Lungs (which was SPIN’s No. 8 album last year), during a brief split with her boyfriend, journalist Stuart Hammond. “Being heartbroken is like having this really horrible freedom,” says Welch. “You can be selfish with your thoughts, which can lead to manic creativity, but at the same time you’re just really miserable.”

By the start of 2010, Lungs had moved a modest 43,000 units Stateside, a figure Welch greeted with indifference. “I’m slightly unambitious,” she says. While her singing voice could cause flat champagne to bubble, if not break the glass, she speaks at a decibel level barely louder than a whisper. “I’m not a world-domination sort of girl.”

Her shyness is countered by the formidable force of her female entourage, which includes manager Mairead Nash and videographer/tour documentarian Tabitha Denholm, both of the British DJ duo Queens of Noize, as well as comanager Hannah Giannoulis, who notes with a trace of surprise that today’s dressing-room accommodations are “basic,” even compared with the band’s early days.

Welch studies the gauzy vintage dresses that Giannoulis has laid out for her on the couch, trying to decide which one she’ll wear when she takes the stage tonight before Drake. Based on the selection, her onstage getup must feature a train of diaphanous fabric befitting a 19th-century lady or a leisure-loving ’70s housewife, though at the moment, the 24-year-old singer is dressed more like a whimsical schoolteacher, in shades of dusty rose and taupe, her auburn hair still damp under a maroon gaucho hat.

When she says things like “I’m not the most confident person,” it’s hard to believe this is the same woman who, during a brief stint in art college, once constructed a six-foot installation of fake flower petals that spelled out YOU’RE A TWAT. (“I think that was directed at myself,” she explains.) Or who, in 2007, convinced Nash to represent her, in the bathroom of a nightclub while drunk and singing Etta James’ “Something’s Got a Hold on Me.”

Welch, born and raised in South London, was then emerging from what she calls the “naughty” phase that followed her parents’ divorce. “I would stay out late at squat parties where I’d be wailing into a microphone somewhere at the end of a corridor that was covered in bubble wrap,” she says. “Then I’d go to school in a torpor with a bottle of Jack Daniels in my bag.”

In her late teens, she penned “Kiss With a Fist,” a cheeky, garage-y paean to casual domes-tic violence, but when it came time to start working on a proper album, she didn’t want to write similarly propulsive punk songs. So she reached out to her best friend and current Machines keyboardist Isabella Summers (a.k.a. Isa Machine). Together, in a studio using only walls and spare pans for instruments, they wrote “Dog Days Are Over,” a song as jubilant as it is frantic, suggesting rapture or devastation or, for the thousands of people who saw the Eat, Pray, Love trailer that premiered last March, Julia Roberts. Its urgent, Broadway-worthy chorus, supported on the album version by harps and handclaps, appealed to Welch’s musical-theater instincts. “I said to Isa: ‘This is it, this is what I want to do,’?” she says. “That song represents the whole album coming together for me.” [Excerpt]

Cover Story, Florence and the Machine