For generations in the South, one little-discussed ritual of youth has had a persistent influence — the ceremonial cranking of southern rock (ironically or not) in your parents’ car while driving to the laser light show. Kids emerge puffed up with Skynyrd’s righteously surly swagger yet are immediately immersed in a futuristic fluorescent constellation, pulsing and swirling to Pink Floyd’s melancholy soundscapes or the Who’s explosive bluster. It can be convulsive and goofy and transcendent; and it’s the closest corollary I can muster for My Morning Jacket’s headlining set at Bonnaroo’s What Stage on Friday night.

In four previous Bonnaroo performances, MMJ earned a rep for three-and-a-half-hour barefoot hootenannies, producing some of the festival’s more florid, riff-roaring memories. This year, finally bumped up to the main stage — “a magical honor,” according to effusive frontman Jim James — they heartily embraced the more formatted journey.

Never straying from their foundation in mountain harmonies and soulfully lurching guitar, the Louisville, Kentucky-based band amped up a relentless blast of horns (“Live and Let Die” style) plus electronic sound effects plus light-show psychedelics (given a boost by scattered glow-stick eruptions from the crowd), in an effort to make their prime 8-10 PM sunset slot, in front of at least 50,000 fans, seem as vital and boundary-blurring as ever. James also wore furry white boots and fiddled with an Omnichord. Your move, lasertainment industry! Mountainvision — pshaw! 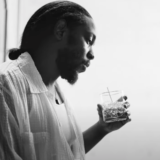 Last year, amid grandiose, billowing trails of black smoke and pre-recorded choral bombast, Kings of Leon were coronated as new Kings of Bonnaroo — local rock boys cash in big. But true to their moody personae, the Followills blithely phoned in their main-stage performance; even their preening felt half-hearted. The crowd never seriously stirred, and the rootsier sound briefly advertised at set’s end was another bait and switch; the only roots of note on subsequent album Come Around Sundown were, per SPIN critic Mikael Wood, .38 Special and U2.

While part of the Kings’ pop appeal seems to be their self-involved petulance (what could be more exotic to a 13-year-old girl?), My Morning Jacket’s Jim James is a shaggy, cherubic music geek, who works to make sure no paying customer ever finishes listening to an MMJ album or goes home from a concert feeling patronized.In rock photographer Danny Clinch’s documentary, Live at Preservation Hall (screened in the Cinema Tent earlier in the day), James and My Morning Jacket collaborate with New Orleans’ legendary Preservation Hall Jazz Band, not so much to expand the alt-rock band’s sound, but for the musicians to absorb some history.

And Preservation was a prominent presence onstage Friday, which created a fleeting vision of an alternative southern-rock Earth Wind & Fire. James holds nothing back in his efforts to prevent his band from stagnating, or regressing into placid jamminess, and he experimented all night with his singing, pushing his falsetto into exploratory corners, sometimes getting lost or crooning off key, but always showing an eager warmth.

Just as intriguing are James’ consistent inversions and playful tweaks of the band’s sound. On show opener “Victory Dance” (from the new album Circuital), a startling trumpet fanfare echoes over a loud ambient buzz; on the Circuital title track, a flurry of acoustic guitars give a Replacements-like melodic groove the sort of forceful, majestic poignance that Paul Westerberg could never conscience; the oddly reassuring fake endings and impish Van Halen flourish on “One Big Holiday”; the pedal steel and boogie-woogie piano getting strafed by incoming electric guitar on “You Wanna Freak Out”; and the hymn as prom theme as Flying V firefight of “I’m Amazed.”

Perhaps most impressive was new track “Holdin’ on to Black Metal,” which, at times, sounds like it’s hair’s-breadth away from mutating into an ominously string-orchestrated Guns ‘N Roses comeback throwdown, complete with supermodel theatrics and vocal screech. But “Black Metal” originated from a more modest source, a source that only a true music obsessive would’ve unearthed –Kwan Jai & Kwan Jit Sriprajan’s song “E-Saew Tam Punha Huajai,” from Sublime Frequencies’ extraordinary compilation Siamese Soul: Thai Pop Spectacular Vol. 2 1960s-1980s. Live, when My Morning Jacket starts wailing and sprawling, “E-Saew” transforms into a Primal Scream or Spiritualized gospel-punk revival meeting/chase scene/rescue mission, rising and falling repeatedly as if James is trying to teach us an essential lesson. He is: music is worth obsessing over.