Chris Martin and Co. preview new EP with tracks "Major Minus" and "Every Teardrop Is a Waterfall." 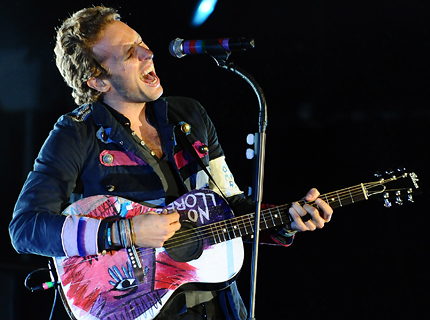 On Sunday, Coldplay will release an iTunes EP Every Teardrop Is a Waterfall,which will lead with the title track they debutedearlier this month. The three-song set will also be bundled with two new tracks: “Major Minus” and “Moving to Mars,” which you can hear here.

The songs will also be included on the band’s still-untitled fall album, co-produced by Brian Eno, who helmed their 2008 set Viva La Vida. You can hear Eno’s atmospheric and arty touch all over both new cuts. “Major Minus” has an echo-soaked production and a fuzzed-out, crunchy guitar riff underneath Martin’s joyous yelps. “Moving to Mars” is far quieter: It starts as a low-key piano ballad featuring Martin dipping into a seriously low baritone, but it soon takes off into a gorgeous anthem, with orchestral synths and a lyrical guitar solo that gets tweaked with all manner of studio effects.

At their recent headlining slot at Germany’s Rock am Ring Festival, Coldplay performed “Major Minus,” “Every Teardrop Is a Waterfall” and three other new songs. Head over here to watch footage. Also expect the band to unveil more material at their top-billed gig at Glastonbury this weekend.

Hear It: Coldplay, “Major Minus”

Hear It: Coldplay, “Moving to Mars”