Watch Ben Gibbard and Co. perform a classic catalog cut, and TVOTR doing "Will Do." 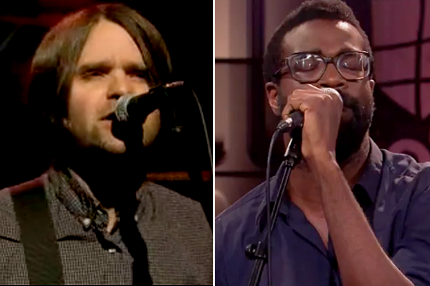 It was a good night for musical performances on late night: Death Cab for Cutie and TV on the Radio dropped by Fallon and Leno, respectively, for hot performances. Death Cab played both a song from their brand new album Codes and Keys, plus a throwback song from 2000, while TVOTR tapped into Nine Types of Light. Watch them here.

Death Cab unfurled a hypnotic version of their single “You Are a Tourist,” which features Chris Walla doing double duty on guitar and keys, plus a web-exclusive take on “Title Track,” off 2000’s We Have the Facts and We’re Voting Yes. Sadly, there was no Death Cab collab with Fallon’s house band, the Roots.

TV on the Radio, meanwhile, delivered a stirring version of “Will Do,” on one of their first television appearances since the death of bassist Gerard Smith from lung cancer, and their rendition was somber and laid-back, but gorgeous nonetheless. (Kyp Malone, going incognito with a cone-shaped hat and glasses, seemed like he’d rather be anywhere other than a television studio.)