The Mountain Goats Unplug for SPIN

John Darnielle and his trio play four songs, including three from this month's new album, 'All Eternals Deck.' 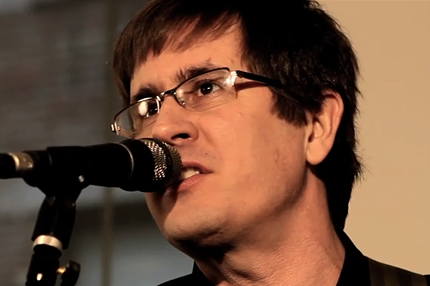 North Carolina’s the Mountain Goats, led by the devoutly worshipped singer-songwriter John Darnielle, just dropped their 18th album, All Eternals Deck — one of their best to date. To celebrate the release, the guys came by the SPIN offices in New York to play a rambunctious four-song acoustic set.

The trio got things shaking with slow-building biblical anthem “Prowl Great Cain,” followed by “Damn These Vampires,” the emotional opener from Deck.

On “Dance Music,” from 2005’s The Sunset Tree, drummer Jon Wurster (of Superchunk fame) tore through the upbeat jam, before Darnielle closed the set with a slower ballad, “For Charles Bronson,” a song dedicated to the archetypal tough guy actor.

These videos originally appeared on SPIN Play, our new iPad app, where you can find exclusive clips like these every month, plus 60 streaming songs, daily news, album reviews, SPIN magazine stories, photos, and other goodies. Find out more.

And, be sure to read our recent magazine feature on Darnielle and the Mountain Goats.