The cinematic clip for "Sadness Is a Blessing" finds the Swedish singer acting alongside Stellan Skarsgard. 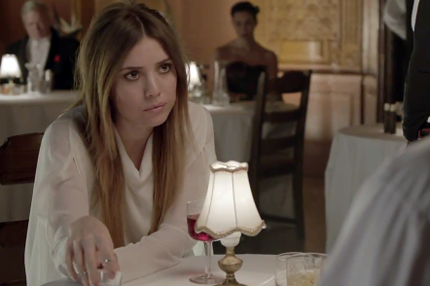 We knew that Swedish pop singer Lykke Li was a captivating performer both onstage and in the studio — it’s why we chose her as our cover star for March’s Next Big Things issue. But her acting chops are something new to behold. She holds her own on the small screen in her new music video for “Sadness Is a Blessing,” sharing a scene with acclaimed actor Stellan Skarsgard.

In the clip, Li and Skarsgard are seated at a table in the center of a fancy dining room, and Li knocks back shot after shot of vodka, self-medicating in the midst of an uncomfortable moment. When she gets up and begins to dance about the restaurant, gracefully albeit drunkenly and backed by the ’60s-feeling cut from Wounded Rhymes, the fussy patrons are aghast, and not even a polite maitre d’ can coerce her back into her seat.

Allthe while, Skarsgard — best known for his role in Good Will Hunting, and set to star in the upcoming Thor and the American remake of The Girl With the Dragon Tattoo — maintains a stoic sense of cool, not willing to interrupt Li’s boozy ballet until the very end.

Lykke Li, “Sadness Is a Blessing”