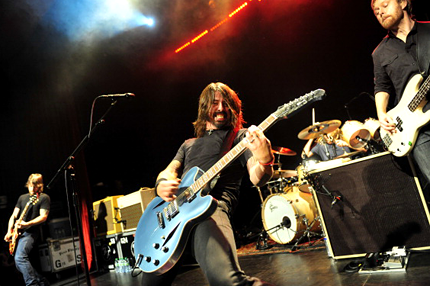 The Foo Fighters have been playing intimate shows to preview material from their upcoming album Wasting Light, but at a gig last week in Cologne, Germany, Dave Grohl and crew delivered a blistering set that featured the LP in its entirety. A crisp bootleg of the show has surfaced online.Check it out below (via Some Kind of Awesome).

“We’re gonna be here a while so get comfortable,” says Grohl at the start of the show, which was organized for contest winners of German radio station 1Live. “It’s gonna be a long fucking night! Ready?” And with that…they’re off, delivering a non-stop 98-minute set that starts with the tinnitus-inducing riffs of “Bridge Burning” and wraps with the Foo’s classic anthem “Everlong.”