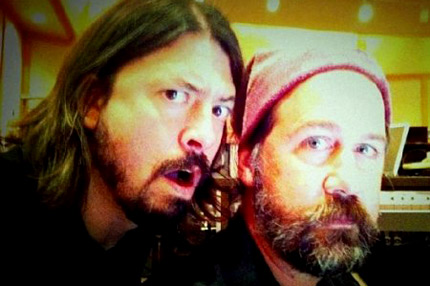 Tuesday night at Paladino’s club in Tarzana, California, Foo Fighters played a “secret” show where the group debuted new songs from their upcoming album, due out next year. But fans were treated to an even bigger surprise during the Foos set: the surviving members of Nirvana – Grohl, bassist Krist Novoselic, and touring guitarist Pat Smear – reunited on-stage for the first time since 1997. (Singer Kurt Cobain committed suicide in 1994.) Fittingly, the group performed Grohl’s sole Nirvana composition “Marigold,” which appeared as a b-side on the 1993 single for “Heart Shaped Box,” according to a report on Blabbermouth and confirmed to SPIN by the band’s rep.

The show was packed with 500 fans (including celebs like Ryan Phillippe and Amanda Seyfried, according to The Hollywood Reporter) and featured the Foos ripping through new songs like “Dear Rosemary,” “White Limo,” and “Back and Forth.” The Foos also revisited classic cuts like “Times Like These.” While video of the “Marigold” performance has yet to pop up online, you can check out the complete handwritten setlist here.

As SPIN previously reported, Grohl has reunited with Novoselic and Nevermind producer Butch Vig for the new Foos record. Novoselic will make a guest appearance on one track, while Vig is producing the entire disc. “Each song is full on, the whole record is full on,” Grohl said of the album. “In the 14 songs, there’s not one acoustic guitar, there’s not one in the house.”