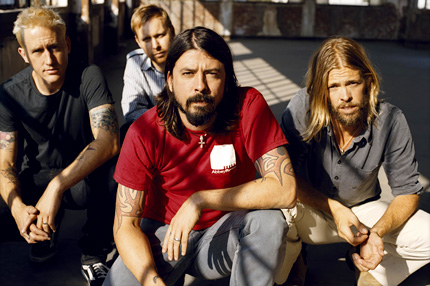 After touring with the heavy-hitting supergroup Them Crooked Vultures, Dave Grohl is getting back to basics with the Foo Fighters for their next album. In an interview with the BBC, Grohl revealed the new Foos record is their heaviest one yet, with nary an acoustic guitar or ballad on the album. “Each song is full on, the whole record is full on,” he said. “In the 14 songs, there’s not one acoustic guitar, there’s not even one in the house.”

The Foo Fighters are cutting the record DIY-style in Grohl’s garage â€” “Totally old school analog,” he said â€” and the album finds Grohl returning to his Nirvana-era roots. Nevermind producer Butch Vig is at the helm and bassist Krist Novoselic will make a guest appearance on bass. “This whole project has been really cool,” Grohl said. “I haven’t made a record with Butch for 20 years.” So far, the Foos have cut seven tracks and are planning to lay down five or six more.

Grohl also revealed that the Foos are documenting the recording process for a movie, to be released in 2011. And the group has already announced a few U.K. dates for July of next year. “Basically, 2011, you’re not gonna be able to get us out of your hair, that’s what we’re planning,” Grohl said. “I’m excited.”