WATCH: The National Live in NYC 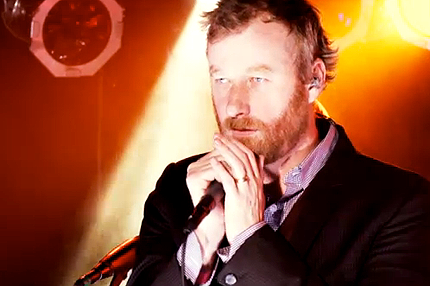 It’s a national holiday today, so what better band, name-wise, to enjoy than — the National? The Brooklyn-via-Cincinnati outfit recently played a super intimate gig at NYC’s Studio at Webster Hall, and MTV filmed it for their new “Live in NYC” web series. Watch the band performing “Terrible Love” below.

In the clip, the band’s twitchy, lyrically gifted singer Matt Berninger caps a stirring rendition of the slow-building epic off 2010’s High Violet — one of SPIN’s Best Albums of 2010 — by jumping offstage and roaming through the crowd, as he’s known to do on occasion.

The set also includes three other cuts from High Violet — “Bloodbuzz Ohio,” “Afraid of Everyone,” and “Conversation 16″ — plus “Fake Empire,” the gripping album opener off 2007’s Boxer.

Watch “Terrible Love” below, then click here to check out the whole session.

For another great live video from the National, watch them play “Afraid of Everyone” at SPIN’s 25th anniversary bash last summer.

The National, “Terrible Love (from MTV’s Live in NYC)”?