Glamour shots of Emily Haines plus slo-mo RPatz/KStew makeout equals the stuff dreams are made of. 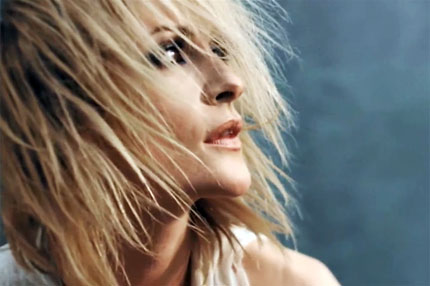 While Twihards nationwide squeal about today’s release of The Twilight Saga: Eclipse, the third film in the blockbuster vampire series, a new video featuring music from the movie’s star-studded soundtrack is out, for a song by Canadian indie poppers Metric, written with Twilight score composer Howard Shore. Watch it below!

Like the video for Muse’s “Neutron Star Collision (Love Is Forever),” the clip for “Eclipse (All Yours)” features teaser footage, from werewolf battles and smoky Taylor Lautner closeups to lip-locking by Robert Pattinson and Kristen Stewart on a beautiful, flower-dotted hillside.

But those three aren’t the video’s only onscreen hotties: Metric’s Emily Haines coos prettily into the camera, whether she’s posing on a mossy stretch of forest floor or scribbling song lyrics in a rustic cabin. Team Emily, anyone? Count us in!

Watch the video below, directed by SPIN contributing photographer Brantley Gutierrez, and tell us what you think in the comments section.

WATCH: Metric, “Eclipse (All Yours)”