Exclusive Video: Jimmy Page in ‘It Might Get Loud’

The Zeppelin six-stringer talks shop with Jack White and the Edge in the new rockumentary. 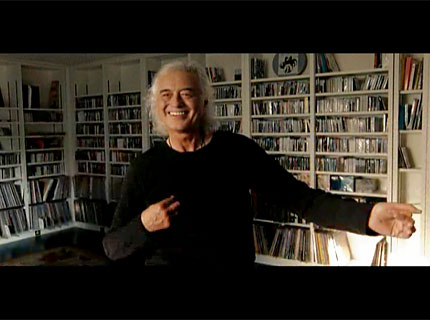 You can start drooling now, guitar geeks. In the new documentary It Might Get Loud, director Davis Guggenheim (who helmed 2006’s Al Gore/global warming doc An Inconvenient Truth) summoned three generations of guitar gods — Led Zeppelin’s Jimmy Page, U2’s the Edge, and Jack White from the White Stripes/Raconteurs/Dead Weather (and whatever new band he started while we wrote these words) — to discuss their hard-rocking craft.

Though the film doesn’t come out until Friday, Aug. 14, we’ve got an exclusive clip for you. Below, watch Page bust out the air guitar as he discusses his love for Link Wray’s instrumental classic “Rumble.”

And read our review of the film here.