The fiery frontman doubles up on "Harsh Realms" and "Anna Is a Stool Pigeon" in this SPIN.com live video performance. 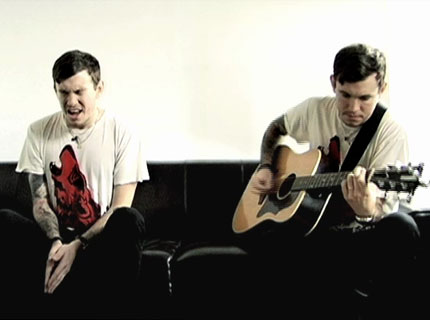 Tom Gabel’s no stranger to video performances, what with his new series in support of his recently released solo album Heart Burns. But when SPIN.com caught up with the punk rock troubadour in Brooklyn to film a live acoustic performance recently, Gabel was treated to, well, a lesson in multiplicity.

Below, watch Gabel perform a duet with himself — admittedly a first for the rocker — on new tracks “Harsh Realms” and “Anna Is a Stool Pigeon” just hours before he lit up New York’s Knitting Factory with old Against Me! obscurities.

Matt Kiser
Tags: against me!, the wire, tom gabel, Videos