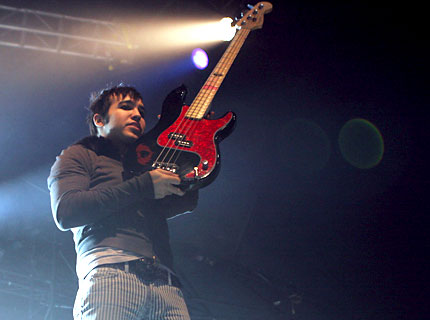 It’s official: Pete Wentz is off the market. In a private ceremony Saturday night (May 17), the Fall Out Boy bassist and longtime girlfriend Ashlee Simpson wed at the home of Simpson’s parents in Encino, CA, NME.com reports via the Sun. According to the report, Simpson’s father Joe, a former Baptist minister, conducted the ceremony, which was followed by an Alice in Wonderland-themed party. Wentz’s bulldog Hemingway is rumored to have been the ring-bearer. Rampant reports stating that Simpson is pregnant with the couple’s first child have yet to be confirmed.

For once Oasis’ Noel Gallagher has taken to the airwaves and offered a few well-received and not-so-controversial words, stating the Britpop outfit’s certainly-not-free, yet-to-be titled forthcoming album, which the quartet recently wrapped recording efforts for, will arrive this September. [Via NME.com]

The classic lineup of Texas-bred freakout rockers Butthole Surfers have reunited for a string of U.S. dates this summer, kicking off with gig Asbury Park, NJ June 24. Rejoining frontman Gibby Haines is Jeff Pinkus on bass, and both Teresa Taylor (a.k.a. Teresa Nervosa) and King Coffey on drums, which, as their website states, is the “rhythm section the band had for most of the ’80s and marks the first time this lineup has played together since 1989.” Guitarist Paul Leary is not expected to perform at any gigs aside from one in New York City due to “prior commitments.” “A mob of teenage geniuses” from the Paul Green School of Rock will join the band on a handful of dates, “forming a virtual Butthole Surfers Orchestra.” [Via Pitchfork]