Gore is speaking to SPIN over Zoom from his hotel room in Berlin, where Depeche Mode held a live-streamed press conference on Tuesday to announce its new album, Memento Mori, and an accompanying world tour. The album will be released in late March, with the tour kicking off March 23 in Sacramento, Calif.

The synth-rockers, whose last record, Spirit, was released in 2017, initially set the internet abuzz in August when they posted a photo to Instagram showing Gore and Gahan inside a recording studio, along with the caption “Finding stability in what we know and love, and focusing on what gives life meaning and purpose.”

Though Memori Mento means “Remember you must die,” Gore says it isn’t meant ominously. “I don’t think it’s a morbid title.” he says. “I like to look at it positively, like, ‘Make the most of your life. Life’s short.’” 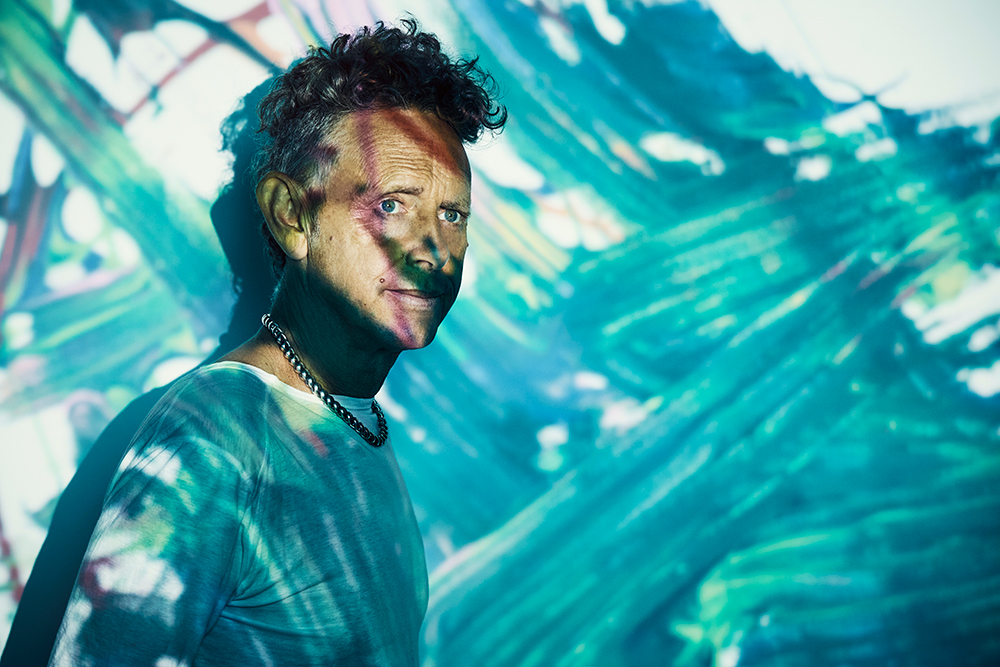 “I felt it was a good representation of the songs we had written for the album,” he continues. “I always think that there’s an element of spirituality to our music and an element of joy, and the music’s kind of uplifting.”

Although the album title was conceived before Depeche Mode co-founder Andy “Fletch” Fletcher died suddenly from an aortic dissection in May, it acquired an additional, poignant layer of meaning in the aftermath of the immense loss, with which Gore is still grappling. He calls Fletcher’s death a “a complete shock” and admits there are constant reminders of his absence.

“I’ve been in this hotel so many times with Andy and he was always in the hotel bar. I could just see a vision of him sitting there with a pint. That brought it back,” he says. “I realized there are going to be so many hotels and places we visit over the next few years where I’m going to be seeing visions of him. It’s inevitable.”

“Grief is a funny thing, isn’t it?” Gore adds. “Little things can bring back so much.”

The recording process for Memento Mori made Fletcher’s absence feel a little less real to Gore because Depeche Mode worked at studios where it had never previously recorded. The bulk of it was made at Gore’s home studio, Electric Ladyboy, with a few days spent at famed producer Rick Rubin’s Shangri-La studio.

Having written the material over the course of the almost two-and-a-half years since the end of 2019, Gore and Gahan finally began recording Memento Mori in July after whittling down 16 songs to 12. “The pandemic … it’s terrible but it has its blessings,” Gore says. “We had so much time on our hands to write, which is always a good thing, so we ended up with a lot of songs to choose from.” The album was produced by James Ford and Marta Salogni.

While the finished tracks have yet to be mixed, a snippet of a track with the working title “Ghosts Again” was played during the press conference atop a montage of the band making the new album, revealing Depeche Mode’s trademark sound to be as vital as ever. The album’s mortality-oriented theme was readily apparent in the lyrics, with Gahan singing, “We know we’ll be ghosts again.”

Though Gore says no decision has been made, “Ghosts Again” seems to be the strongest candidate for the lead single. “That is the favorite at the moment,” he says. “It’s got such an upbeat feel to it and we’ve listened to it thousands of times and we keep saying we don’t ever get bored with it, so that’s got to be a good thing.”

Eager to hit the road after “a lot of sitting around over the last two years,” Depeche Mode is still savoring that its 2017-18 world tour in support of the album Spirit was one of the highest-grossing tours of that time period. “It’s sometimes hard to grasp how we manage to keep attracting fans,” the 61-year-old Gore says with awe. “Our audiences are not just our age. They go down to teens, which is just amazing to me.”

And while there’s clearly no shortage of songs to choose from when putting together a Depeche Mode setlist, there’s equally no shortage of enthusiasm about performing them, with decades-old hits including “Everything Counts,” “People are People” and “Enjoy the Silence” having stood the test of time. “It’s fun to play live and our audiences are amazing,” says Gore. “Every time we play, it’s like an amazing celebration and the audiences are singing along to every song.”

Now a duo, with Gahan and Gore as the sole remaining original band members, Depeche Mode will tour next year with its long-standing touring musicians, drummer Christian Eigner and multi-instrumentalist Peter Gordeno.