I share a middle name with one of my nieces, a connective thread tying the two of us together. As she grew up, into that golden age where a child begins to find her own place in the world, that connective thread bound us not only in name, but our respective love and deep obsessions with pop culture.

One Christmas, while I was up to my elbows in turkey making dinner, she took the aux cord connected to the stereo, plugged in an iPod Touch and announced matter-of-factly “I am going to play you the best song. You’re going to lose it when you hear this.”

Weird Al” Yankovic’s “The Saga Begins” — his parody of “American Pie” — sprung from the tiny speakers of the kitchen stereo.

I came to my own relationship with “Weird Al” many years earlier. I was one of thousands of angst-riddled young people that held so obsessively tightly to our grunge king in 1992 when Weird Al opted to reimagine my beloved “Smells Like Teen Spirit” by Nirvana. Egregiously, he also took the music video and remade it shot-for-shot in his own craven image, replacing Kurt Cobain at the center of the dust bowl pep rally held in a hazy, washed out gymnasium. Surely this mockery was an act of aggression. 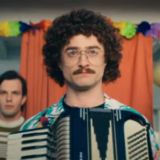 True art reveals itself to us in a slow, careful measure over time. Repeated viewings of the “Smells Like Nirvana” music video peeled layers of his performance back and revealed his true intent. Where I had initially balked at his derision, I began to see the true face of Weird Al. He was being playful with his imitation of Cobain’s singing style and the undeniable fact that some of Nirvana’s lyrics are audibly difficult to decipher. His humor was less a punch down than it was a gentle rib in the side.

Weird Al seemed to share the same love and appreciation that millions of us held for Nirvana. He just found a different vehicle to process and display his affection.

In a music shop on the Canadian holiday the day after Christmas (Boxing Day) in 1993, I made an impulse buy. My eye was drawn by number 11 in the record store’s advertised top 20 albums of the year. The CD cover was a perfect recreation of the ubiquitous Jurassic Park logo, albeit with the head of the T. rex skeleton replaced by curly hair, glasses and a cheshire cat grin.

That was the day I bought Alapalooza. I was beside myself with anticipation of just how he might take what I could only assume was our shared love of the blockbuster movie and weave it so intricately into satirical gold.

The title track, “Jurassic Park” — a parody of the Jimmy Webb song “MacArthur Park” (you know, the one about the cake left in the rain and the recipe lost) — opens the album. It’s a tribute to the imagination of Weird Al that within the confines of a somewhat banal plot, he saw the potential for danger and wrangled forth a parody that is a beat-by-beat breakdown of the previous summer’s blockbuster film to lay on its bare frame.

Weird Al and I were just two among the horde of people enamored with Steven Spielburg’s prehistoric masterpiece. He was honoring it in the only way he knew — by taking the structure of a recognizable song and plastering it with a layer of the thing he loved so dearly he could not stop talking about it.

Jurassic Park was the biggest movie in the world, becoming the first film to gross $50 million on its opening weekend alone. It was less a film and more an earth-shattering event. It was an unavoidable phenomenon. Even in the Yukon, you could see it at any hour of the day in the movie theater, if you so desired. By the time I bought Alapalooza, I had seen Jurassic Park no fewer than four times. It was everything I talked about to anyone within earshot. Every lull in dinner conversation and quiet moment in recess at school was a conversation orbiting Jurassic Park. Endless minutes spent talking of Dr. Grant and the velociraptors, or when the lawyer gets eaten in half while hiding in a tiki-themed outdoor toilet.

Alapalooza gave me a new way to appreciate Jurassic Park, by learning to laugh at its little absurdities. That record also cast a new light on artists like Billy Ray Cyrus (“Achy Breaky Song”) and Aerosmith (“Livin’ in the Fridge”). I was never a fan of the originals, but the parodies gave me an understanding and appreciation of how catchy those songs were. Alapalooza also showcases Weird Al’s strength as a songwriter. “Frank’s 2000 inch TV” almost sounds like a lost R.E.M classic unearthed. Weird Al is an artisan, molding parody masterpieces from blocks of pop music history.

The true beauty of Weird Al is his connectivity to all of us. We all have something so near and dear to us that our fierce loyalty triggers a mama bear response to anyone making fun of it. Nirvana, Red Hot Chili Peppers, Madonna and Coolio have all been targets of Weird Al’s endless well of clever pastiches of pop music and cultural nods.

What took a moment to seep into my heart was that most of these artists enthusiastically agreed to Weird Al’s parody machinations (although Coolio was reportedly unhappy with “Amish Paradise”). They saw and felt the love and affection he had for them, pop music and making weird and funny art. Some of the greatest artists of our generation have understood the need to take a step back from their masterworks for a second and watch as a beloved peer clowns on it for a few minutes. Weird Al has a bold tendency to be tender and open, laying bare his understanding that to have something so meaningful to say, you must also understand that there is joy and humor in this world.

Weird Al understands that need more than anyone. Through his eyes, we can see and hear the need to abandon our obsessive need to live as human shields around our favorites. To kill your darlings is to set them free, and there is no greater truth than a perfectly crafted Flintstones-themed parody of two different Red Hot Chili Peppers songs. You won’t know how much you love something until you are willing and able to laugh in its face.

Through Weird Al, we gain a new language of understanding music. He is a window into the past — luring us in with the siren song of his unique comedic sensibilities, but providing an education of pop music that spans decades.

In Weird Al’s world, nothing is so precious and beyond your reach that it becomes untouchable. Everyone is created equal in the eyes of Weird Al, and we abide by the rules of his universe. You are here to be part of — but never the butt of — the joke. It’s only because of our shared love of music and pop culture touchstones that we can share these moments together, bond over them, find our people and gain a new understanding of pop music past and present. Weird Al provides a few precious minutes we can remove ourselves from the persistent need for everything to be as perfect as we remember and delight in the unending imagination of possibility.

We can all be recreated in Weird Al’s world, all we have to do is let go.