King Gizzard & The Lizard Wizard are slated to release their second record of 2022, and the band shared the album’s third single, “Kepler-22b,” today.

The “Kepler-22b” accompanying Alex McLaren-directed video is all sorts of crafty. As compilations of claymation, crayon drawings, and paper collages all swirl together. The new single samples Barney Mcall’s “Yemaya One,” which guitarist Cook Craig says he found at a store in New York.

“I hadn’t heard any of his stuff before,” Craig said in a statement, “but remember putting it on and being blown away straight up. I remember thinking damn this is literally a sampler’s dream. It took me a while before I actually realized he was from Melbourne too. I guess it’s funny like that, sometimes you gotta travel halfway around the world to discover an inspiring piece of music made by someone who probably lives on the same block as you” 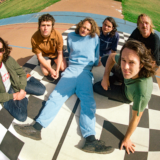 King Gizzard and the Lizard Wizard Keep Getting Bigger, And They’re as Surprised as Anyone

“Kepler-22b” follows the latest King Gizzard singles, “Magenta Mountain” and “The Dripping Tap.” All three tracks are featured on Omnium Gatherum, which is out this Friday, April 22.

Following a thunderous set at Coachella, the hard-touring are currently on tour. They’ve made their way throughout North America, and they just added a third show at Red Rocks Amphitheater, following two sold-out nights in October. Tickets for the new concert go on sale at noon EST on Friday, April 22. King Gizzard is scheduled to perform tonight at Marquee Theatre in Tempe, Arizona.

King Gizzard previously released Butterfly 3001 back in January. We haven’t seen a year with more than two new King Gizzard releases since 2017, when the band unveiled five studio records.