Australian psychedelic rockers King Gizzard and the Lizard Wizard have announced the tracklist and release date for their new album, Omnium Gatherum. The 16-track double LP will arrive on April 22 on the group’s own KGLW label. Following the release earlier this month of the 18-minute first single “The Dripping Tap,” a second new track, “Magenta Mountain,” is out now, accompanied by a video directed by John Angus Stewart.

The clip features footage from a recent Gizzard performance in Melbourne, where several other unreleased tracks from Omnium Gatherum were also played. “You know when you have a really weird vivid dream and it sticks with you like glue? One day I came into the studio and [group member] Stu [Mackenzie] was trying to write one of them down,” group member Ambrose Kenny-Smith says. “He kept banging on about this paradise called ‘Magenta Mountain’ that he had seen, but none of us believed him. Every day since then, he’s been still trying to convince us all that it’s real, and one day he will.”

Omnium Gatherum also features the thrash-y “Gaia,” the jolly, near yacht-rock of “The Garden Goblin” and the falsetto-sung boogie “Blame It on the Weather.” The album was originally intended as a way to round up material that never felt quite right on previous Gizzard releases. But band members quickly began writing new songs once Australian COVID-19 protocols were eased and they were able to gather in the same room, resulting in a project featuring everything from super heavy shredding to hip-hop and off-kilter vintage pop. 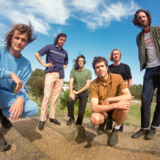 King Gizzard recently had to scrap dates on the South American edition of Lollapalooza due to COVID cases within the touring party, but the group will begin a nearly eight-month world tour on April 11 in San Diego. Highlights of the itinerary include an appearance at the Coachella Valley Music & Arts Festival next month in Indio, California, five sold-out shows in six nights at Barcelona’s Primavera Sound festival in early June, an Oct. 10-11 run at Red Rocks outside Denver that sold out in 48 hours and Gizzard’s biggest New York-area show to date at Forest Hills Tennis Stadium on Oct. 21.

What’s more, with Omnium Gatherum in the can, King Gizzard is apparently already finished with another new project. Yesterday, the band tweeted, “Mastering an album today.”