Remember those young punk rockers we all saw jamming out to their single “Racist, Sexist Boy” in the L.A. Public Library a couple weeks ago? Well, now they’ve been on Jimmy Kimmel Live! The Linda Lindas — Mila (10), Eloise (13), Lucia (14) and Bela (16) — made their national television debut on June 3 to perform their recent viral hit and detail the origins of their band name.

Eloise, the group’s singer-bassist, explained that “there’s a Japanese indie film called Linda, Linda, Linda, and in it there are high school girls who cover the song ‘Linda Linda’ by The Blue Hearts, so we’re kind of named after both of those.”

“However, none of us are named Linda,” added guitarist Lucia.

Kimmel asked about the backstory of “Racist, Sexist Boy,” which landed The Linda Lindas a deal with Epitaph Records, and was answered by Mila, the band’s drummer and youngest member. “The backstory is that a boy from school told me that his dad told him to stay away from Chinese people,” she said, adding, “I told him that I was Chinese, and he backed away from me.” 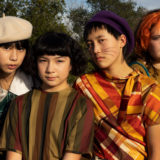 Hear The Linda Lindas Rock Up The Go-Go’s ‘Tonite’

Eloise added, “There’s also a lot of sexism around boys our age. … So we were really angry, and we decided to write a song about it.”

It wasn’t until Bela’s history class that the girls noticed their library video had picked up traction. The guitarist’s phone kept buzzing, “and then I opened my Instagram, and it’s like my whole feed is of us,” she said. “And I was just like, ‘Whoa!'”

Before their rousing versions of “Racist, Sexist Boy” and another original, “Claudia Kishi,” Kimmel jokingly had the girls agree to not break any of the set: “I know you’re a punk rock band, but…”