The elephant in the room has a name: Axl Rose.

AC/DC singer Brian Johnson’s actual room is illuminated by standing lamps on either side of a long, dark couch; he perches in the middle with his trademark cap and in his jolly British brogue begins the Zoom interview with an a capella tune. It incorporates my name and concludes with the lyrics “I’ll see you in my dreams.”

Disarming, charming and voluble, my chat with the AC/DC singer is a relief. Rose, the Guns N’ Roses frontman, had replaced Johnson on the band’s European tour in May 2016, after Johnson’s exit the previous month due to worsening hearing issues. Ironically, Rose himself was infirm; he performed some AC/DC shows seated and in a leg cast.

Four years and a ton of hearsay later it was confirmed: Johnson was officially back with AC/DC, his hearing improved due to top-secret technology. From his Florida home, Johnson’s beaming visage and brimming enthusiasm confirm he’s back in…well, the band. And Power Up is proof positive that Johnson is in full voice and the band at full tilt, despite the devastating 2017 loss of co-founder and rhythm guitarist Malcolm Young. 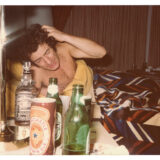 “Four years ago people would have thought, ‘This ain’t gonna happen ever again,’” Johnson admits to SPIN. “It’s all screwed up; Brian’s lost his ears; Cliff’s retired; Phil is kind of screwed up in New Zealand with the situation [legal issues stemming from drugs and a “threatening to kill” charge] that he was in.”

It all began — again — Johnson says, when Sony and the band’s management asked Angus about doing another AC/DC record, to which he says the guitarist replied, “Well, if I can get the boys back together.”

“Angus phoned me, and I said, ‘You know Ang, abso-fucking-lutely,’” Johnson recalls. “Then he phoned Cliff, who said, ‘Well, if Brian and Phil’s gonna come back, absolutely.’ I think he said ‘yes’ twice. And [nephew] Stevie [Young] was there, obviously.”