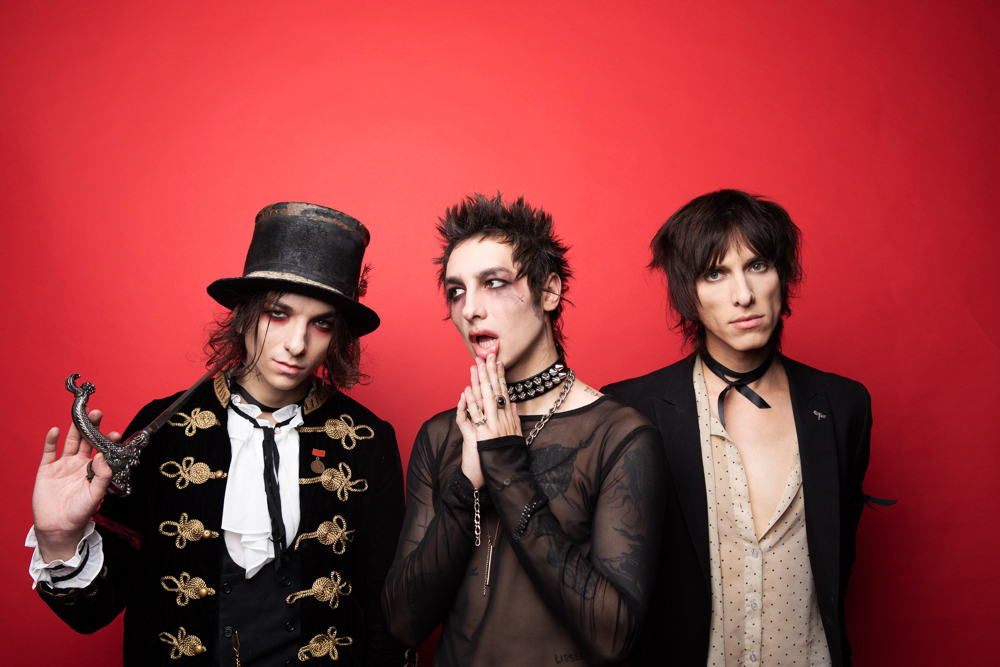 Among all of the rock bands to capture the ears and hearts of the younger generations, few have done it better than the three brothers in Palaye Royale. Vocalist Remington Leith, guitar-wielding older brother Sebastian Danzig, and drummer/youngest sibling Emerson Barrett have brought their fusion of artful indie, hard-hitting punk, and classic glam rock to audiences since they were teenagers, with May’s release of The Bastards — and coinciding live performance on SPIN’s Untitled Twitch Stream — escalating their theatrical sound to a whole new level.

But while the comparisons to over-the-top acts like Mötley Crüe and My Chemical Romance might be accurate in some regards, Palaye Royale have also shown a versatility to hit genres ranging from electronic industrial to anthemic rock and every sound in between. That diversity — combined with their diehard internet-savvy fan base — helped to land them on Marilyn Manson and Rob Zombie’s joint tour last summer and cemented the band as a fan favorite that won’t be going away anytime soon.

SPIN caught up with the debaucherous siblings to chat about their skyrocketing popularity, musical changes, and how quarantine has helped to keep things within the family.

SPIN: Over the last few years, Palaye Royale have built an incredibly dedicated fanbase. What’s it been like to develop such a large devoted following so quickly?
Remington Leith: It’s definitely a strange transition for us. We were going in our mom’s car and opening as 1 of 5 [bands] in 100-capacity rooms where maybe 10 or 15 people would show up, and we were doing that for like two or three years straight. Then when we went on our first headlining tour and we noticed that we were selling out shows in the biggest rooms that we played. I feel like mentally, we’re still all traveling in our mom’s car just trying to make it to the next step, so it really hasn’t hit us in the sense that we could take a break. We’re always going to be pushing.

Emerson Barrett: I think we’ve always kept the mentality since our first shows when barely any people would show up, and that’s why it’s important for us to keep that connection with our fans as much as we can. When we’d play London or Amsterdam or somewhere like that, we’d always go out after the show and meet as many people as we possibly can, take photos, and have a beautiful time. They’ve become family for us over this process, and we always look forward to going out and seeing them again.

Sebastian Danzig: When we started going on tour, we’d be playing at high schools, playing shows with metal bands, and just going on whatever tour would allow us to come on. To see where the band has gone to where we’re now playing 2,000-capacity rooms, going on tour with Marilyn Manson and Rob Zombie, and playing a lot of these major festivals, it’s been a really exciting journey so far.

Particularly given the changes made on The Bastards compared to your previous work, what would you say has inspired the band’s sound to evolve so significantly since the early days?
RL: We’ve changed so much throughout the years as people, so we expected our music to make some changes as well. We never wanted to stay as the same band or become just one thing or be defined in one genre. We just want to make art, and that’s not classified as one genre. We just love writing, and sometimes a different style comes out. It’s definitely been a journey from our first EP to now, and I keep expecting our music to evolve and change.

SD: I think there’s no boundaries when it comes to us creating. For Remington, Emerson, and myself, we’re all on the same page but we all have our own directions. I think it’s important that we each have our own influences and can fight for what we want included, because as long as we’re on the same page, it makes for a much more interesting story. This album showcased a lot of that, where Remington’s lyrics made it a lot more honest and personal because he was sharing his story and our story. I’m looking forward to seeing where the next album is going to go.

Considering all of the ups and downs the band has been through, how does keeping the band together as three brothers impact things rather than bringing in other friends and musicians?
RL: With family, you can yell at each other so disrespectfully, and you know they won’t leave. We can punch each other in the face and still step on stage five minutes later, so I feel like it’s a better solution than when you have a friend in the band, and you have a fallout and they leave. This is blood, so if you try to leave, you’re going to get your ass kicked and be forced to stay. We all have our [Palaye Royale] tattoos now, so it’d seem pretty fucking stupid if we tried to stop.

SD: When we finished the Manson/Zombie tour and then went to Australia and Japan, it was such a dark period for some reason for the band. We were at the point where we thought we weren’t going to be a band anymore and that we were going to break up. I think it was just because we surrounded ourselves with so many different voices and opinions and we got away from that three-brother aspect where we all had the same ideas. I think we’ve honestly become better friends now throughout the pandemic because we all choose to hang out with each other rather than being forced to hang out with each other because of work. It’s a healthier relationship, but the debauchery is still there.