Best of So Far, Features, Lists

Boldy James & Alchemist, The Price of Tea in China (ALC)
The 36-year-old Boldy James belies the misconception that rap is a young man’s game. Over a decade into his career, the Detroit rapper is adding new cadences to his arsenal and penning his sharpest verses ever. On The Price of Tea in China, his second Alchemist-produced album, James still raps directly, almost conversationally, about the realities of drug dealing. But he also employs more figurative diction, delivering metaphors about bricks via extended rhyme schemes and fluid run-ons (or should we say “Run-Ins”). Meanwhile, Alchemist remains the Scorsese of street rap, an auteur whose alternately skeletal and lush beats thump and knock like they echo from the corners of grimy bodegas. Like Freddie Gibbs and Madlib’s excellent Bandana, The Price of Tea in China is a sequel with greater potency, the raw elements combined in a refined formula. — Max Bell

Ka, Descendants of Cain (Iron Works)
Ka is defined by his most strenuous times. Every album is another attempt to process the horrors he experienced in his native Brownsville. The gaunt faces of fiends smoked to husks of bone-taut skin. Fathers sent upstate indefinitely for minor offenses. Third-world poverty in a first-world country. In the past, he has mapped those traumas onto feudal Japan (Honor Killed the Samurai) and Greek mythological epics (Orpheus vs. The Sirens). On Descendants of Cain, quite possibly Ka’s best album yet, he uses Old Testament analogies to get biblical about “yogis [who] did stretches upstate” (“Patron Saints”). Over grim suites with few (or no) drums, he retreads his genesis one artfully scripted and soft-spoken couplet at a time. One day, maybe he’ll be free of the pain, as he puts plainly in “Solitude of Enoch,” of watching “brothers killing brothers.” — M.B.

KeiyaA, Forever, Ya Girl (Forever)
Bedroom R&B, but not in the way you’re thinking. This is that Car Seat Headrest shit: Exquisitely layered lo-fi from a multi-instrumental whizkid who prefers 1999 to Sign ‘O’ the Times. Unlike Frank Ocean, she does not have Coachella money (“I can barely afford to eat much more red meat”), partly because she spent it on Korg synths (same song, the astounding “Hvnli”), and yes, she’s also bedroom R&B too: “Before I put this pussy on your sideburns / I need to check in with my heart and mind.” And if that’s Nicki Minaj by way of Noname, “As long as you respect me I could care less if you like me” is Meshell Ndegeocello by way of To Pimp a Butterfly. — D.W.

Kiana Ledé, Kiki (Republic)
Only 23, singer/actress Kiana Ledé Brown got her first record deal through a Kidz Bop talent search nearly a decade ago. But it was the 2019 radio hit “EX” that established Ledé as a subtle vocalist who can deliver a nuanced lyric about platonic friendship. And her strong top-to-bottom debut album proves that she can hang with the new school R&B elite like Ari Lennox and Lucky Daye, both of whom guest on Kiki. The production team Rice N’ Peas throw in some nostalgic interpolations of Biggie’s “Juicy” and OutKast’s “So Fresh, So Clean,” but they’re even better when their lush tracks take left turns, like the jazzy instrumental coda on “Plenty More.” Expect plenty more. — A.S.

Machine Girl, U-Void Synthesizer (Machine Girl)
Between Ms. Apple’s magnum opus and these Pittsburgh mutants’ finest album, 2020 was poised to be a big year for barking dog recordings even before we all became our pets’ 24/7 roommate. Not sure if it makes it better or worse to hear living, unprocessed things howling from inside the mainframe but at least it breaks up the melting-vibrator insanity. Machine Girl’s hyperventilating industrial recalls some serious dollar-bin din: Pitchshifter anyone? Or Mindless Self Indulgence sans Lenny Bruce ambitions? There’s even some stray ear candy; check the synth riff spliced throughout “Scroll of Sorrow.” But for the most part they sound like a best-case scenario from inside Robert Pattinson’s microwave. Call them Hitachi Teenage Riot. — D.W.

Ashley McBryde, Never Will (Warner Nashville)
Tough and tattooed country singer Ashley McBryde writes vividly about the kinds of dive bars she played in for a decade before she was discovered by Eric Church and included on a list of President Obama’s favorite songs. So her second major-label album rocks harder than 2018’s Grammy-nominated Girl Going Nowhere, and the vindictive “Voodoo Doll” could pass for Heart. But the hard exterior can’t disguise the poignance and poetry all over Never Will, even in “One Night Standards,” an unsentimental paean to hotel room hookups: “How it goes is, the bar closes / There’s no king bed covered in roses / Just a room without a view.” — A.S.

Pearl Jam, Gigaton (Monkeywrench/Republic)
Pearl Jam’s 11th LP will be forever linked to its apocalyptic era. This is partly due to the pandemic that halted its touring cycle, but also its numerous references to the climate crisis (check the melting glaciers adorning the cover) and the U.S. president who did nothing to help stop it (see: the seething “Quick Escape”). But Gigaton should also be remembered as a bold creative reboot: “Dance of the Clairvoyants” lumbers into paranoid, Talking Heads-styled art-funk, while the ambient “Alright” transcends into a secular prayer. Three decades deep, Pearl Jam are still searching. — Ryan Reed

Perfume Genius, Set My Heart on Fire Immediately (Matador)
On the early lo-fi Perfume Genius recordings, you can hear the grand ambition of Mike Hadreas yearning to break through the scratchy fidelity. And it’s been a gradual evolution, each successive project inching him closer to the kaleidoscopic sprawl of Set My Heart on Fire Immediately, his fifth and most expansive LP. Aided by producer Blake Mills and a crew of A-list session pros (including bassist Pino Palladino and drummer Jim Keltner), he commands every style he attempts, which are more numerous than ever: “Describe” is fuzzy dream-pop country, and “On the Floor” is funk-washed grind, complete with organ straight out of the Maytals. — R.R.

Poppy, I Disagree (Sumerian)
She’s not a girl, not yet a Cylon. Here, the chirping, medicated melancholy of Poppy’s earlier albums gives way to violent rage with the suddenness of a software crash. There’s a neat fractal correspondence between the lurching, K-pop-inspired melodrama of the songs here — the way the razorblade guitars turn them on a dime — and the replenishing destruction the album itself inflicts on its creator’s previous persona, which wanted you less than 100% sure this was a human being and not an affectless nihilist algorithm. I Disagree‘s hooky fury is the sound of rupture: either the algorithm’s been force-fed something poisonous it can’t help but vengefully regurgitate, or Poppy’s gone from somebody’s project to real girl. Or one is a metaphor for the other. — T.W. 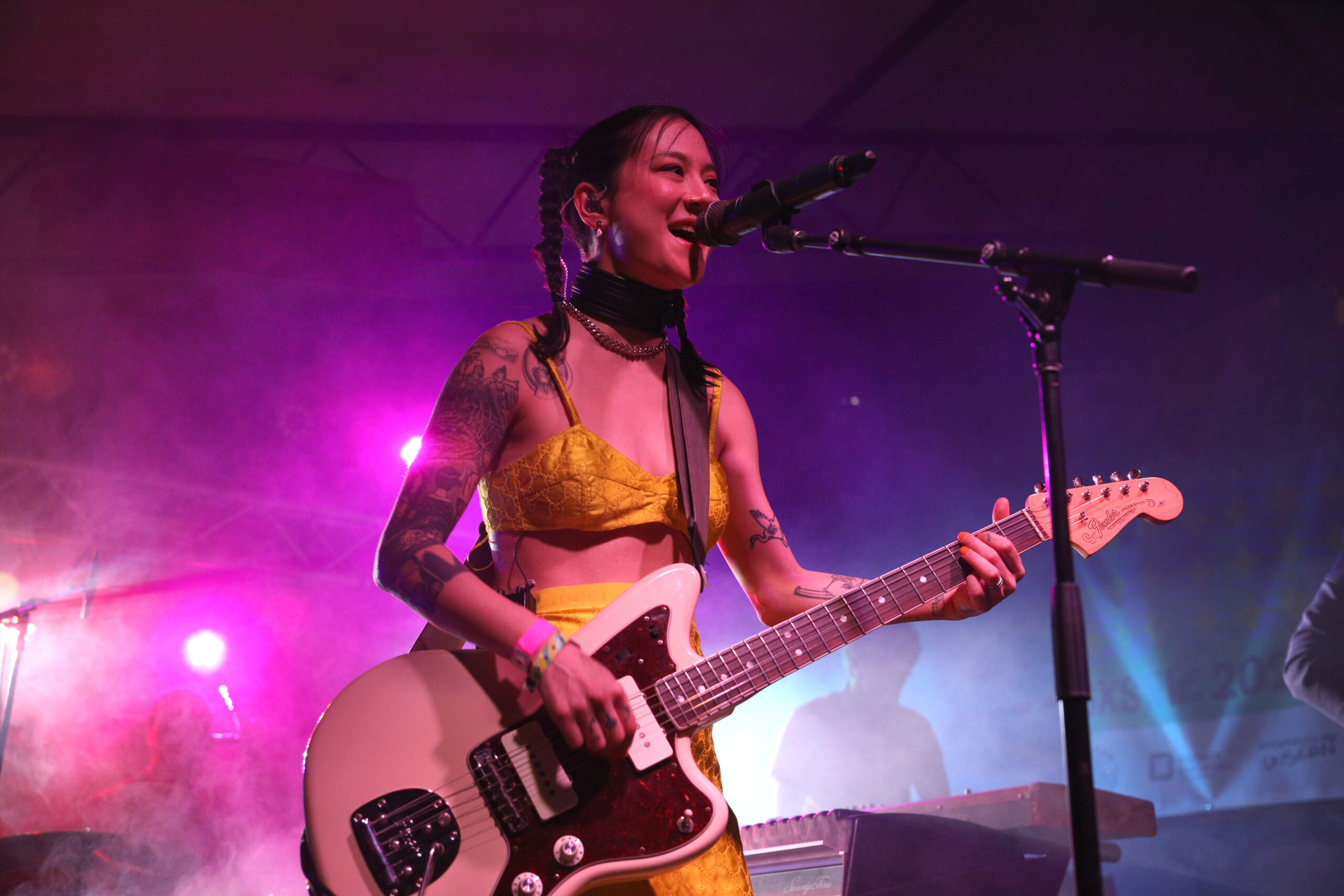