Poppy on Her Transformation From ‘Internet Project’ to Pop-Metal Changeling

If you interviewed Poppy a year ago, you may as well have been talking to a different being. The experimental musician/YouTube curiosity first made her name as a character in videos that can only be described as futuristic infomercials, where her ASMR-like monotone suggested a robot with Stockholm syndrome and made everyone fascinated and uncomfortable despite the obvious humor (her best friend is a plant) and dedication to the role (scour YouTube and you’ll find the occasional clip of her cracking up, though). Thinkpieces about her are peppered with the term “uncanny valley.”

Poppy’s early music itself suggested Robyn’s “Fembot” becoming sentient, and since 2015, she’s had a career’s worth of highs (record deals with Island and Mad Decent, her own surreal web TV series, I’m Poppy) and lows (abuse from former collaborator Titanic Sinclair, ugly public fallout with Grimes).

Then she went metal.

A couple of tracks on 2018’s Am I a Girl suggested her greatest whiplash yet, particularly “X” and that brief Grimes alliance “Play Destroy,” which sounds like nothing so much as Wilson Phillips-meets-Rammstein. Leaning into these thrashy new dynamics, this year’s I Disagree is her best and freakiest album yet, an unlikely mélange of Marilyn Manson (“Anything Like Me”), Queen (“Concrete”), J-pop (…also “Concrete”) and Faith No More (everything, really) done with impossibly seamless care that’s won her a spot on Deftones and Gojira’s tour this summer.

Slowly shedding the kayfabe of her former online persona, Poppy spoke to SPIN via phone in one of her most candid interviews yet about both her carefully orchestrated past and burn-it-all-down future. 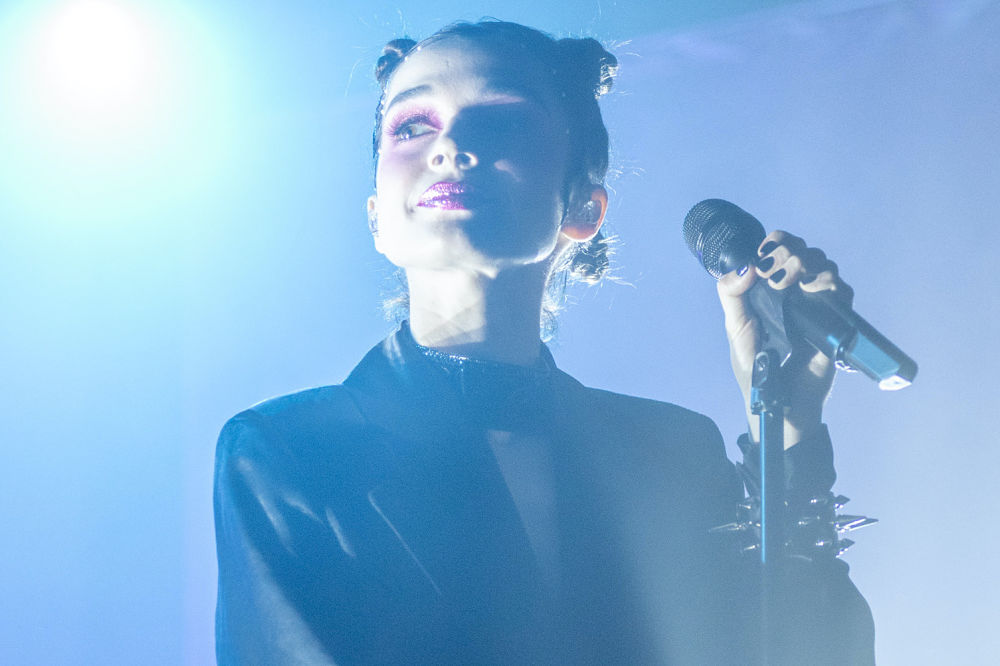 SPIN: I saw you on this tour and it seemed like you were really letting the music speak for itself, is that a conscious thing you’ve been moving towards?
Poppy: Yeah, definitely, it’s a lot more freeing and the music is at the forefront. Where did you see the show?

It was a lot of fun. Do you feel like you’re spending more or less time caring about social media these days?
I’d say significantly less.

How did you come to that decision?
Lately, I’ve been wanting to spend a lot more time in my own brain, as opposed to somebody else’s brain or caring about what’s out there on the World Wide Web. Because we’re only here on this planet for a short time and you spend most of your life on the internet and are gonna die with no legacy. So I prefer to spend less time and developing myself as an individual.

I Disagree has a lot of preoccupation with death. I wanted to know if the desire to sing about death and the finality of everything brought you into writing songs that are more metal or if it was the other way around.
I wasn’t particularly setting out to write about a certain thing or subject, but I will say making this album. Once it was done and I looked at it as a whole work, there were some themes that definitely developed throughout the tracks and throughout the course of the process. I think a lot of self-acceptance happened throughout the making of it. Being okay with the unknown and not having all the answers, I think that’s important. I really feel I’ve become more certain of myself and what I want in life and I think that the album is definitely a timestamp and very important to me.

Do you feel like it’s an end or a beginning to something?
Both. It’s a send-off to some of my past works, me waving goodbye to them to a degree, but also turning a new page and the theme of burning things down and starting over is very much what I feel that I’ve lived. I feel pretty good about it.

What’s been the biggest change in your life since the album came out?
Touring a lot more, which is what I’ve always wanted to do. And every step I’m just trying to be appreciative of what I have. Another big change is the experimentation and direction that I’m going in currently; I’m excited to get back in the studio.

How soon do you plan to go back in?
I’m currently doing that right now but I’d like to release a new album quickly. I think it’s important to keep the music going, at least for me as an artist. You know when you go through a lot whether it’s good or bad or traumatic or beautiful, you only live it one time in this one stage in this one mindset with these certain amount of survival tools and I think it’s important to document it. My favorite artists have released many, many albums throughout their careers and I feel that they would say the same, they can listen back to an album and say, “Oh, this is definitely a timestamp in my life and I’m excited for the next part.”

Which artists are you thinking of?
I’d say David Bowie. Also, on another end of the spectrum, the band Of Montreal. They have many, many albums.

Do you bring plants on tour?
I tend to collect plants and fans have been gifting me those, but I do bring my sphynx cat on tour.

A song like “Concrete” bounces between several different styles very quickly, did the song end up that way by chance or did you mean to write that way from the start?
That was written around the time we wrote the song “X.” “Concrete” was written right after and we held onto it for a little while because it felt right for the next chapter. We wrote the song in sections and there was a common thread that was intended, but in the end, it became something more than we could have imagined. That one is a favorite for sure; even that song alone reminds me of a specific time and I’m glad I got it out, you know, when we did.

Yeah, it reminds me of Queen in some ways, but it’s also as if a song could scroll through different Snapchat filters.
Yeah, also like scrolling through Instagram. That was one of the things we said in the studio too; you can’t keep people’s attention very long so give them 20 different songs in one and they don’t know what’s happening next.

Are you currently writing other things in that style?
I guess it depends, it’s case by case. The mode that I’m currently in is, you know, cataloging layers of sounds.

Have you collected any sounds you’ve never used before?
I’d say lots of harsh sounds.

Harsh sounds from musical equipment or, like, the sound of hairdryers?
It ranges, really. I’m just still on the journey but… harsh sounds that end up being unrecognizable from what’s collected in the initial recording.

Do you think that they’ll lead to more harsh sounding songs or are you going to add some contrast with that in some way?
There always has to be a contrast for me.

Watching your previous interviews, I was wondering if you felt that people try too hard to draw you out of your comfort zone?
I think that either insecure people, or people that don’t ask questions with substance, they’ll tend to try to do that, yeah.

You appear to try to take yourself out of your comfort zone on your own terms.
It has to be on my own terms. I’m only interested in having the upper hand nowadays.

Do you feel like the attention your music is getting versus the attention you’re getting from people obsessed with figuring out your identity is finally leveling out in your favor?
I think it’s been less about figuring out my identity… at the beginning when it was my main internet-based project, that served its purpose and it was what it was. But I’d say I’m a lot happier than I’ve been in the past for sure, and that’s because i was given the space to explore and exist in this world.

Do you feel like you achieved what you set out to in the “internet project” phase?
That project served its purpose and there’s no part of it that I regret, because it did bring me to this point in some way, so I’m glad it did what it did. As far as setting out for it to be as big as it was and get the attention that it did, I didn’t know what that would look like. And then in terms of my career as a whole, I didn’t know that it would last for that span of time. But I always knew everything is temporary and I’m just excited to move forward. I always knew where I wanted to get to, and I feel pretty good about where I’m going. It did unlock a bunch of opportunities for me that I probably wouldn’t have had otherwise.

Was it a lot of work to keep a straight face?
I was very committed to it for a long time and I’d say I’m committed equally to this new chapter. There were a lot of things I was definitely forced to do that were very exhausting, that all played into it. A lot of underlying things I can elaborate on at another time.

What was it like the first time you did a public performance in your “natural” state?
I don’t know. It’s all recent and quite natural. There’s shapes of me in everything I do of course and I don’t think everyone is 100% real, especially in Hollywood. Whenever there’s a camera or a microphone in somebody’s face you’re getting a projection of what they want you to see. My life is a performance.

Are you excited about going on tour with Gojira and Deftones?
My friends and I have been big Deftones fans for a long time and when I got word of the invitation, I didn’t think it was real, so that was a big day. Chino [Moreno] is amazingly talented and I’m honored.

He’s always been really open-minded about the sounds that they love and what they bring in, like being unafraid to cover Weezer and Sade early on. I can see you’re both a match in that way.
Thank you. It takes a lot of confidence and certainty in yourself to be somebody that I would consider a tastemaker for music. He has a platform and a level of success that’s huge, and to welcome other artists that are from different realms to tour with or to play the Dia de Los Deftones festival, I admire that.

Do metal fans communicate with you differently than pop fans?
I don’t know. In terms of my show, I’m having a lot of fun watching the audience dance and move to the music. I think a lot of the show happens in the crowd and maybe [metal fans] react slightly differently but I welcome all reactions, they’re all good to me.

Have there been any really emotional responses?
Moreso now, especially going out on this last tour. People say the music really changed their lives which means a lot to me.

What about any Poppy tattoos?
Many. I think I posted one on Instagram yesterday.

I can’t imagine what that must be like for you.
Pretty great. It feels like I’m serving a purpose that’s meaningful.