Hayden Capuozzo was 11 when he boldly strode into a Houston Barnes & Noble in 2002 to buy his first CD. His mom wasn’t going to tell him what to listen to. He was a grown-up now, armed with his own money; he bought Sum 41’s millennial classic All Killer No Filler.

“It changed my life,” he tells SPIN.

Now, 17 years later, Capuozzo is one of the alternative scene’s freshest innovators—a bass music DJ called Kayzo. He’s even got Sum 41 drummer Frank Zummo touring as part of his spark-flying, percussive-heavy Unleashed live shows. And the once starry-eyed fan has recorded in studio with modern metal greats Underoath, Our Last Night, Of Mice & Men, and more. He’s remixed Papa Roach classic “Last Resort,” and recently produced the drum solo for Blink-182’s Travis Barker on their tour with Lil Wayne.

“He’s the heavy metal DJ,” Zummo says. “I’ve heard some people get close, but they’ll just make the synths sound like guitars, [use] a lot of programmed drums, and it’s just too computer-sounding. I haven’t heard it done this way, and he’s working to combine all these different genres of people. … He’s really paving the way.”

But Capuozzo didn’t start out with the lofty goal of being a musical innovator—or even a musician. As a kid, he dreamt of being a professional hockey player, practicing his stick swing to a Houston-fueled soundtrack of Southern rappers Slim Thug, Mike Jones, and Paul Wall, alongside the early-aught suburban rebellion of A Day to Remember, Story of the Year, and the like.

His first concert was Green Day’s American Idiot tour. The energy of the immersive, collective experience blew his teen mind and left an indelible impression on his career to come. Soon, he was exposed to electronic music during his visits with European hockey kids, and at 16, he went to his first dubstep show headlined by U.K. producer Rusko.

Capuozzo moved to Canada as a professional hockey hopeful when he was 19, but soon quit when the high-level business and politics overshadowed the sport.

“I felt pretty burnt out,” he admits. “I didn’t love to play the game anymore.”

So he moved to Los Angeles and enrolled in Icon Collective’s music production program. The technical school is known for graduating festival-grade DJs, including Jauz, Nghtmre, and Slander. He took the name Kayzo—which he came up with during a music business class about brand identities—and in 2012, won a discovery competition held by major event brand Insomniac, the organizers behind 450,000-person rave Electric Daisy Carnival.

“It just takes that little bit of hard work,” Capuozzo says. “There are people out there that are musically talented and gifted, but anyone can learn anything if they really want to. There’s really no boundaries.”

By 2015, Kayzo was performing at festivals around the world, releasing bass-heavy electronic songs on popular dubstep labels Buygore, Firepower Records, and Steve Aoki’s Dim Mak. But the formulaic nature of the build-and-drop sound he mastered on 2016 tracks “Can’t Stop,” “Born Again,” and “Kill It” soon wore him down.

“I started to get super uninspired,” he says. “I remember driving home [from the studio] like, ‘I just can’t listen to dance music right now.’ I started shuffling through old Bring Me the Horizon, old Underoath, and it just clicked: The writing lyrically and in composition, chord progressions and melodies—some of this really sounded familiar to me. It sounds like dance.”

The similarities he saw in the musical formulas emboldened him to experiment with metal composition inside an electronic framework his fans already liked and expected. It took some trial and error, but he finally found a sound that worked on 2017’s “Feel the Power” featuring Micah Martin, with whom he also collaborated on “Overload,” the title track to his January 2018 debut album.

“I took a whole new approach to the writing, used guitars,” Kayzo explains. “It was so much more simple with a lot less layers going on than what I would normally be doing with dance production. It felt real, honest, and organic.”

He began working on his first record, inspired by this new dance-metal hybrid. While he ached to bring more bands in the studio, it was hard to get metal managers to respond to him.

“A lot of them don’t understand the dance music culture as much, and they see us as just DJs,” he explains. “Once they get to realize we’re producers, we know how to write music, we know how to play chord progressions, instruments and write and make all this, they open up like, ‘Wow, this is way different that I thought it was.’”

Since he couldn’t get the bands to come to him, he went to the bands, and it started with a remix of Papa Roach’s 2000 smash “Last Resort.”

Released in May of 2018, Kayzo’s rework—which has since garnered 20 million plays on Spotify—was largely true to the original, but with a slower tempo, harder-hitting beat, and crazed, metallic dubstep breaks. He sent it to the publisher, and Papa Roach frontman Jacoby Shaddix was “blown away.”

“It’s an aggressive version of electronic dance music,” Shaddix says. “The way he builds up to his breakdowns and his drops, they just fucking slam. It reminds me of punk, hardcore, or metal when they drop into a half-time riff. Yeah, it’s keyboards and electronic sounds, but the tempos, rhythms, and paces are similar. The dubstep elements feel like a modern interpretation of heavy metal.”

Kayzo and Shaddix performed the remix at Lollapalooza in 2018, and the co-sign opened collaborative floodgates.

But even before that, he was already starting to get his foot in the door, landing collaborations with other notable rock musicians. Sum 41 singer Deryck Whibley and drummer Zummo joined Kayzo’s October 2017 headline performance at the Hollywood Palladium. Together, the trio performed “Fat Lip,” “Still Waiting,” and “In Too Deep”—not remix versions, but live renditions of the originals. The crowd loved it, and Zummo stayed on stage to lay percussion down over some of Kayzo’s hits. A friendship soon blossomed that saw the two collaborate in studio on the DJ’s sophomore album. 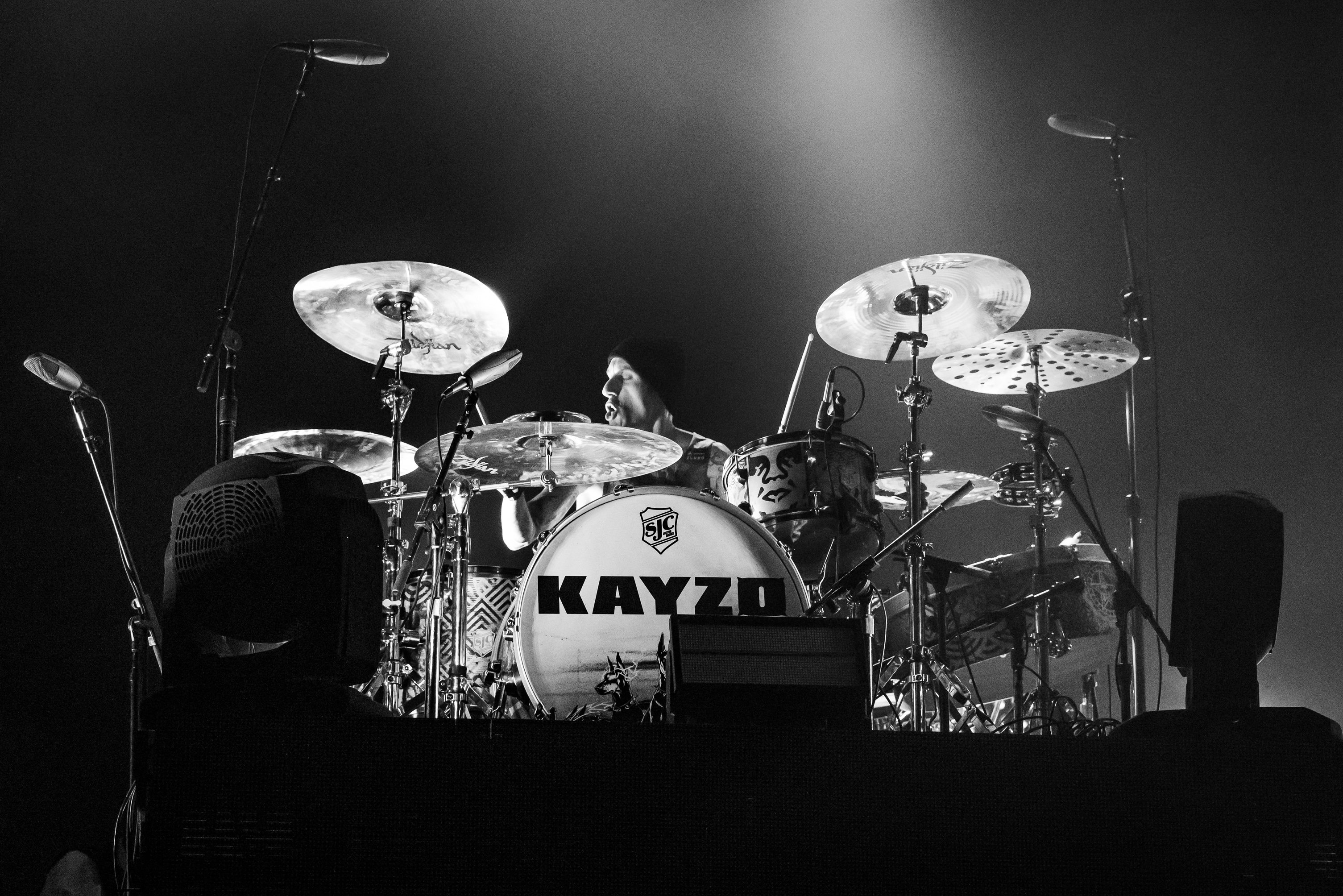 Ahead of that release, Kayzo worked with Zummo to develop a breakneck live performance on par with the DJ’s hybrid sound. The drummer joined the producer on stage during Kayzo’s 2019 Unleashed tour—which his sophomore album is named for— flanked by the former’s industrial bang troupe, the Street Drum Corps. Zummo even outfitted Kayzo with a snare in the DJ booth. They worked covers of Sum 41 and Rise Against into Kayzo’s setlist, and fleshed out the tour bill with DJs and bands alike.

Those bands included Memphis May Fire and Our Last Night. Kayzo says he was nervous to see how crowds would react to a bill that featured sets by modern metal bands before his own dubstep-fueled mayhem took the stage, but the combination gave audiences the same a-ha moment he had in 2015 listening to metal in his car. The coup de grace was a headline set at Coachella’s Sahara tent in April 2019. Kayzo brought out Motley Crue’s Tommy Lee for a drum solo, as well as All Time Low frontman Alex Gaskarth (with whom he’d just released a single), and U.K. metal singers Yungblud and Grandson.

“We came out there just fucking ripping, playing the heaviest, hardest shit,” Zummo remembers. “To see the whole crowd just going fucking apeshit … that’s when I was like, ‘Wow, this is rad.’ Having people like Grandson and Yungblud up there being political on the mic, it was dark for that hour and that vibe. To see how well it translated, I knew this is something special.”

After becoming a darling of the alt-rock world, Kayzo worked with Underoath, Gaskarth, Zummo, and more in the studio for his sophomore effort Unleashed—which dropped in August—as a full-fledged producer directing the show.

“They came in to work with me like, ‘We want to make you happy, man, so if you don’t like something, let us know,’” he says, “which is crazy, because these guys sit there and write these riffs and write these lyrics for their own bands. They don’t answer to anyone. … That was really cool.”

He put their organic recordings against production from dance fellows Yultron, 1788-L, k?d, and more. If Overload was a hypothesis of possibility, Unleashed is a 15-track thesis on the intertwined roots of Kayzo’s myriad influences.

It’s exciting to see his vision come to life, but there’s still a lot of room to grow. Kayzo would love to rock his hard-synth sound with Bring Me the Horizon or Rob Zombie, artists known for reinventing their styles and fearlessly pushing the envelope. He dreams big, but he’s learned to trust the process.

“[Unleashed] is another stepping stone in the plan to continue to blur lines musically, whether it’s rock or electronic or whatever,” Kayzo says. “I want to inspire the next group of producers to take risks and follow their heart and vision, even if no one else believes in it.”