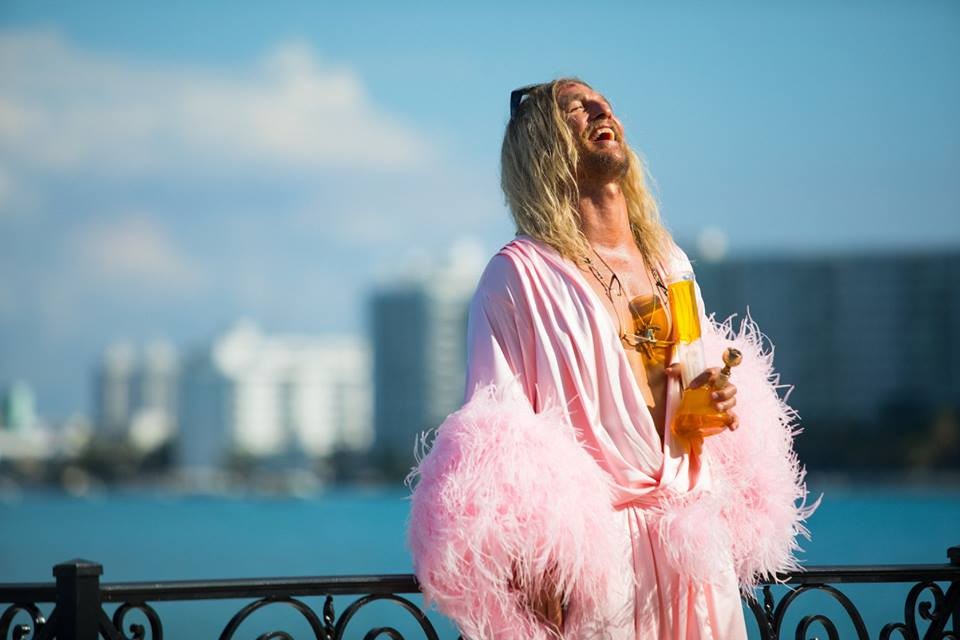 Harmony Korine’s The Beach Bum tells the story of Moondog, a Floridian poet who you might label a “troubled genius,” if he ever got into real trouble. In a role that can feel like a parody of himself, Matthew McConaughey boozes, smokes, cheats, fucks, steals, blows lines, breaks out of rehab, hangs out with Zac Efron, runs from the law and always gets away. Every so often—when he’s had enough fun, and the light is just right, and the mood finally strikes—he actually sits down to write. Despite Moondog’s occasionally despicable behavior, it’s hard not to root for him, and you’re never remotely worried that he won’t end up OK. At one point, he calls himself a reverse paranoiac, always convinced on some level that the universe is conspiring in his favor. In the sense that his universe consists entirely of the sunscreen-scented playground Korine has constructed for him, full of diversions and empty of consequences, he’s absolutely right.

In terms of flamboyant color and unchecked id, Moondog is equal to James Franco’s Alien from Spring Breakers in the pantheon of Korine characters. But he’s far from the only reason to watch, or even the wildest part of the movie. Moondog’s work on his magnum opus becomes an Odyssean quest, taking him back and forth between the Florida Keys and the mainland, precipitating encounters with the most elaborate cast of characters Korine has ever assembled. Some of these are his family and closest friends, helping him lovingly to his goal; others are more chaotic, showing up for a few tumultuous minutes of screen time before fading off toward the sunset or nearly dying in the jaws of a murderous beast.

As he did with Spring Breakers, Korine populates The Beach Bum with a mix of respected actors inhabiting outlandish roles and genuine oddballs just showing up and being themselves, deriving a distinctly uncanny quality from the tension from the two. Below, we’ve compiled a list of the movie’s most memorable freaks, ranked from least to most insane.

The Beach Bum’s plot kicks off in earnest when Moondog is summoned back from the Keys to attend his daughter’s wedding; she’s marrying an apparent loser whom everyone calls “Limp Dick.” Limp Dick just doesn’t seem to get the family he’s marrying into, and they don’t get him. He’s a buzzkill, and a would-be foil to the movie’s psuedo-spiritual hedonistic impulses. He’s also a big milk-drinker. Moondog is a great man—some cosmic amalgam of beachside poet and Randian Übermensch. Limp Dick, then, is you and me. He exists in The Beach Bum as a provocation to the audience: a challenge to get over ourselves and submit to the radical indifference of Moondog and his acolytes. Yes, Moondog is a long-suffering addict and a criminal. But where Limp Dick sees destructive idiocy, the other characters, more attuned to the warm pink glow of Korine’s meticulous illusion, see greatness. We should try to see it too, lest we become Limp Dick ourselves. — WILL GOTTSEGEN

Snoop Dogg is always gonna be Snoop Dogg, and The Beach Bum is highly aware of that, turning up the Snoop persona to 11. He plays Lingerie, a connoisseur of R&B and high-grade weed, providing Moondog with what could be described as Christmas tree-sized plants of the most exotic strain imaginable, and surrounding himself with half-naked women and a live band of stoned Jamaicans. The Beach Bum doesn’t challenge us to change our perspective on Snoop, but it reminds us to appreciate him for the smoked-out icon he is. — ISRAEL DARAMOLA

8. The butler who serves Moondog a single PBR on a silver platter

Moondog’s needs are simple. When the titular peripatetic returns from the Keys to his wife’s enormous Miami villa, he eschews refined luxuries in favor of a humble PBR. That this consummately trashy beverage is presented to him on a silver platter by an attentive servant is an excellent metaphor for the film as a whole. — W.G.

Moondog’s wife Minnie is the most purely good character in The Beach Bum, and the impetus for much of its action, setting her husband on a path back to writing meaningful work after years spent wrapped up in straight hedonism. She’s a devoted partner, but not docile or deferential, not waiting chastely as he’s off seducing random passersby and smacking asses with cooking utensils. When Moondog realizes that Minnie has appetites of her own, unconnected to him, he freaks out only briefly, but soon seems to fall even more deeply in love. The dynamic is genuinely touching, and gives an early indication that Moondog really is committed to both sides of that age-old beach bum philosophy: live and let live. — ANDY CUSH

Jimmy Buffett’s career as an actor hasn’t exactly been rich. Before The Beach Bum, his most prominent roles were in Jurassic World (as “Running Park Visitor with Margarita Drinks”) and in the 2006 adaptation of Carl Hiassen’s classic YA novel Hoot. But somehow, shooting the shit with Snoop’s Lingerie and McConaughey’s Moondog in a hot tub, Buffett pulls off a perfectly meta version of himself. For these characters, “Magaritaville” is scripture. It wasn’t enough that Korine have Buffett on the soundtrack—for a complete cinematic vision, he needed the avatar of Floridian excess in a supporting role. — W.G.

5. The blind airplane pilot who smokes a huge blunt because it makes him see better

The Beach Bum is full of goofy one-off characters. We shouldn’t account for all of them here, because it’s better to experience them in the moment. But we should take some time to share a little love for Lingerie’s pilot: a man who technically can’t fly, because he has glaucoma in both eyes, but can do anything if he’s high enough. The pilot is essentially a bad stereotype of a Jamaican, but the portrayal is so cartoony that you can’t help but find it endearing as he helps Moondog and Lingerie escape from the cops. Truthfully, we could all use a friend like him. — I.D.

It’s a testament to the sheer unmitigated life coursing through The Beach Bum that Moondog is not a shoe-in for the top of this list. McConaughey works both ends of the Korine casting spectrum described above—between real actors trying to be weird and real weirdos trying to act—amplifying his own idiosyncrasies until they become a sort of self-referential performance art. It’s impossible to imagine anyone else playing this character, which Korine hammers home with a few well-timed overt references to the McConaughey mythos. In one scene, Moondog conspicuously taps on a bongo; in another, he’s on a boat when another character utters McConaughey’s most famous catchphrase out of the blue: “Alright, alright, alright.” — A.C.

Lewis, Moondog’s ball-breaking agent, talks to his client like he’s an aging prizefighter whose earning potential is on the wane rather than a writer nursing his precious literary talent. On paper it might sound like a heavy-handed comment on the crass commercialization of art, but Jonah Hill’s manic performance makes the role confusing, combustible, and impossible to reduce to those broad strokes, ratcheting up the cocaine energy he brought to Wolf of Wall Street until it begins to feel more like a hallucinogenic. Hill deserves a prime spot in the canon of actors who can’t seem to commit to an accent, sliding so often in and out of Lewis’s Foghorn Leghorn drawl that you wonder whether he might be doing it on purpose. — A.C.

Martin Lawrence is an all-time great comedian, and if there’s any director I’d peg as a fan of his antics, it’s the equally brash and unapologetic Harmony Korine. Lawrence’s Captain Wack runs dolphin tours on the ocean from his rinky-dink personal boat, and can fry up a mean squid. In keeping with Korine’s meta-textual investigations into the wider personas of his actors, Martin plays the most slapstick role in the craziest sequence of the movie, and he doesn’t disappoint. He commits to his Captain character as though it’s one of the many he would’ve played on his old sitcom, and when he finds himself at the center of a particularly gnarly scene, he channels the kind of over-the-top comedic hysteria that he’s portrayed many times in the past. Someone start the campaign for Korine to direct Big Momma’s House 3 now. — I.D.

Efron, who has toyed with his image as a blankly beautiful man in past roles, takes it to outer space here, essentially playing a human version of the Flamehead character on a pair of JNCO Jeans. Speaking of jeans: in one scene, Efron wears what may be the biggest pair ever put on film. His weirdly segmented beard was reportedly inspired by a panini, but it also looks like a sheet of lined notebook paper. He’s heavy into Christian rock. And he vapes, a lot. Just as the Beach Bum presents a feverish, hypersaturated take on Florida itself, based in reality but hopped up on cheap tequila and expensive weed until it becomes a vision of heaven, so too does Efron channel a kind of ideal: wild, tan, virile, unpredictable, and pure. The ultimate Florida man. — I.D.