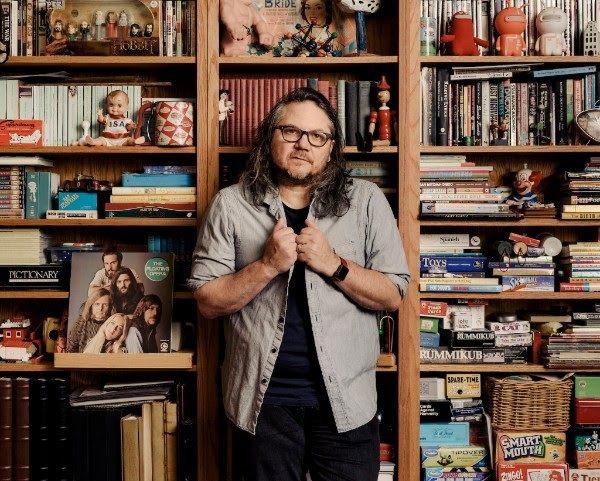 Jeff Tweedy’s memoir Let’s Go (So We Can Get Back): A Memoir of Recording and Discording with Wilco, Etc. comes out next week, and today Rolling Stone published an excerpt in which the Wilco frontman details his history with migraines, panic attacks, and the painkillers he used to treat both. It’s a dark look at what precipitated Tweedy’s rehab stint during the recording of Wilco’s 2004 album A Ghost Is Born (detailed at the time in Spin) and an unglamorous study of how his struggles influenced the album’s direction.

Of the LP’s songs named after animals, Tweedy explains that he originally conceived of the project as a Noah’s Ark analogy—the looming storm being his own death, and the ark an offering to his children. He writes:

I had this vague idea that the album was built around, where all of the songs were animals representing the different aspects of my personality worth saving. I don’t know, it sounds ridiculous now, but at the time it made perfect sense. The dread I was feeling was profound and definitely biblical in its scope; it felt like a big flood was coming, something no one could survive. So I was saving anything I could, piling it all onto this ark as a way to salvage whatever I could of myself. I was a goner, but I didn’t have to lose everything. A Ghost Is Born would be a gift to my kids, who could turn to it when they were older and put together the pieces of me a little bit more than I’d been able to put myself together for them in real life.

Tweedy adds that he tried to avoid recording high, meaning his time in the studio was riddled with migraine pain. He describes how the album’s notorious 12-minute drone outro on “Less Than You Think” was an attempt to mimic the “isolating alien landscapes migraines often induce,” and how the pain inhibited his ability to track songs to completion.

“Spiders (Kidsmoke)” is another recording where I feel like you can hear my condition pretty clearly. Because of its length, getting a great full take felt unlikely with the window on my ability to remain upright closing fast. So we restructured the song to be as minimal as possible with the fewest number of chord changes. This allowed me to just recite the lyrics and punctuate them with guitar skronks and scribbles to get through the song without having to concentrate past my headache too much. We attempted two takes and take one is the one on the record. Take two was incomplete.

The excerpt also details Tweedy’s familial history of mood disorders and substance abuse, with a particularly tragic focus on the artist’s years-long attempts to rationalize his own drug habits as something different. Tweedy’s writing, allergic to lionizing these experiences, reflects what he told Spin’s Chuck Klosterman back in 2004, “I have always been rigid in my hatred of the stereotype of the debauched, tortured artist … I hate the idea that artists suffer more than anyone else.”

Tweedy launches a six-city book tour in Brooklyn on November 13. His solo album WARM, including the lead single “Some Birds,” is due on November 30 via Wilco’s dBpm label. You can read the full book excerpt here.