During Monday’s episode, Late Show host Stephen Colbert directly addressed the disturbing allegations of sexual misconduct against his boss and CBS head Les Moonves in a new bombshell New Yorker exposé. Colbert initially handled the uncomfortable topic with a little levity consisting of the comedian pretending he hadn’t read the article and then doing a spit take of his water before switching to booze upon hearing that the report had been written by Ronan Farrow.

After the monologue, Colbert delivered a sobering desk segment demanding that his boss be held accountable for the claims made in the New Yorker article, which included an accusation by actress Illeana Douglas that he blacklisted her at CBS and tried to withhold payment on an existing deal after she refused his advances.

Colbert admitted that he’s “shockingly naive” to be so surprised at how rampant misconduct is among gatekeepers in show business and that a “middle-aged guy with some power in the entertainment industry” probably isn’t the “ideal” person to address the toxic work culture that enables abuse. He also opened up about his discomfort given how supportive Moonves has been to his show. However, Colbert didn’t equivocate on the need to hold powerful people responsible for their actions. From Monday night’s broadcast: 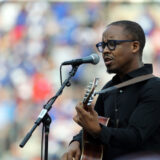 Everybody believes in accountability until it’s their guy. And make no mistake, Les Moonves is my guy. He hired me to sit in this chair. He stood behind this show while we were struggling to find our voice. He gave us the time and the resources to succeed. And he has stood by us when people were mad at me. And I like working for him. But accountability is meaningless unless it’s for everybody. Whether it’s the leader of the network, or the leader of the free world.

Colbert’s entire speech affirming his support of the #MeToo movement and its reckoning can be read here.

Since Farrow’s story was published on Friday, Moonves’s fate at CBS remains uncertain. According to Variety, the network’s board of directors, of which Moonves is chairman, declined to take a vote suspending the embattled CEO during a Sunday conference call. He is expected to remain the chief executive while the board conducts an outside investigation into allegations against Moonves.

In response to the six women who accused Moonves of harassment or assault, the network head sent the following statement to the New Yorker:

“Throughout my time at CBS, we have promoted a culture of respect and opportunity for all employees, and have consistently found success elevating women to top executive positions across our company. I recognize that there were times decades ago when I may have made some women uncomfortable by making advances. Those were mistakes, and I regret them immensely. But I always understood and respected—and abided by the principle—that ‘no’ means ‘no,’ and I have never misused my position to harm or hinder anyone’s career. This is a time when we all are appropriately focused on how we help improve our society, and we at CBS are committed to being part of the solution.”