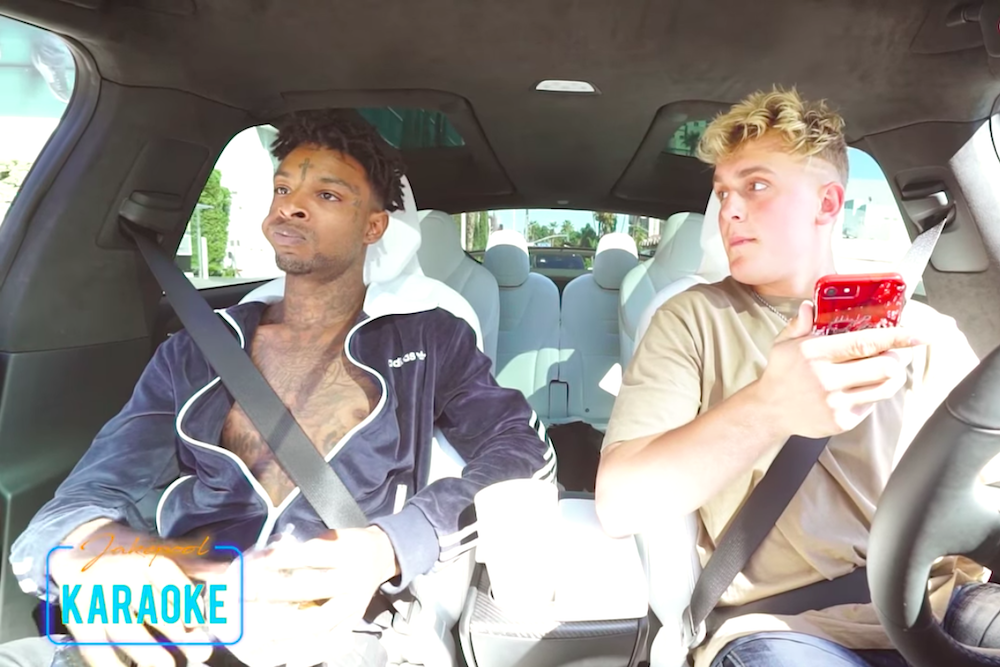 Jake Paul is a 20-year-old YouTube personality and rapper who’s managed to get two abysmal singles into the Hot 100. He’s manic, armed with catchphrases, and promotes himself with a line of merch, all core necessities for maintaining a ravenous teenage fanbase, who he calls J Paulers. I don’t “get it,” but according to his YouTube subscription base, there are over 10 million people that do. 21 Savage doesn’t seem like he “gets it” either, but he decided to ingratiate Jake Paul by riding with him for a Carpool Karaoke segment. (Well, “Jakepool Karaoke.”)

The joke here is how a guy who’s as unapologetically street as 21 Savage could possibly connect with someone who’s as on-brand with his obnoxiousness as Jake Paul. At one point, Jake Paul, zany and quirky, turns on the car stereo to play “Blue (Da Ba Dee).” 21, stolid and not with the shits, turns it off. 21 Savage tries to explain his stage name, only for Jake to make a joke he’s probably heard numerous times before.

Jake Paul: Some people say I’m a savage, too.

Jake Paul: I do like—[pauses, then air quotes]—savage shit. (The “shit” is censored with dolphin sounds.)

For the duration of the interview, 21 Savage has the same feigned enthusiasm of a bar patron stuck in a conversation with a close-talking Bill Maher fan. The tragedy here is that you can tell 21 made an effort to make himself feel comfortable. Peep how his Adidas tracksuit is zipped low enough to expose his left nipple for most of the ride. That nipple becomes a metaphor, a symbol of spoiled leisure.

There will probably be more content like this, too. Jake Paul has the social media leverage to cajole hungry hip-hop stars—ones more concerned with getting an audience than cultural integrity—into joining his shenanigans. He’s already got studio time with Gucci Mane, who’s killed a man but definitely isn’t too hard to say no to pop money. Jake Paul continues forth with his corny content mill; rappers get the consequent extra streams. So it goes.