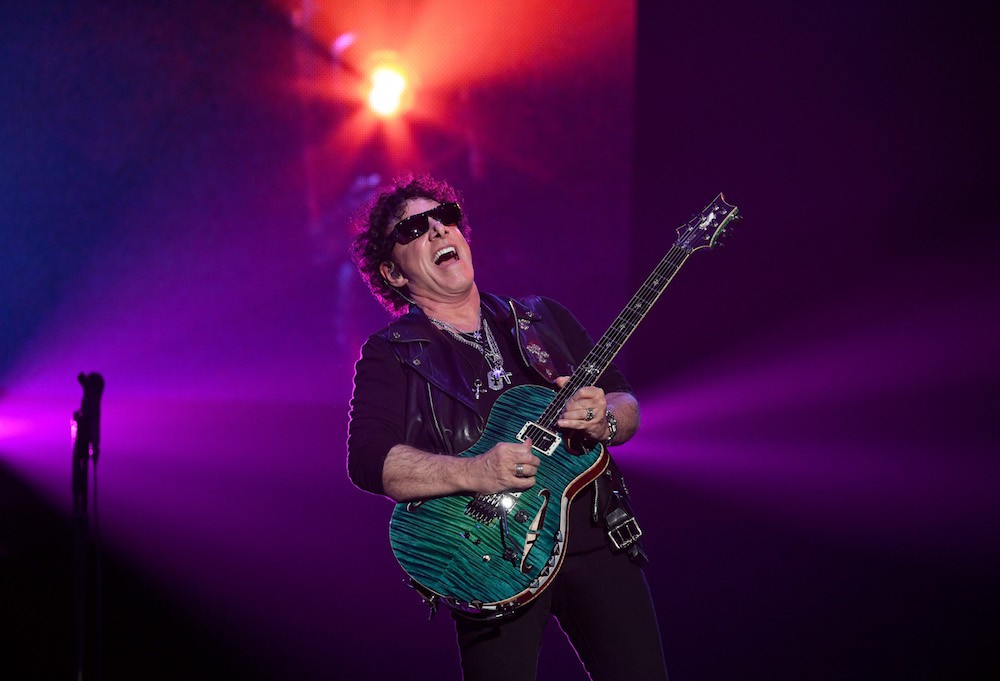 Just over a week ago, three members of Journey made a visit to Donald Trump’s White House, meeting with press secretary Sarah Huckabee Sanders and posing for photos with staffers. If you’re the type who’s not ashamed to belt out “Faithfully” when it blasts regally forth from a wedding DJ’s P.A. speakers, perhaps you were a little disappointed with the classic rock survivors for aligning themselves with the president. But there’s no way you were as bummed as Journey guitarist and founder Neal Schon himself.

Schon, who has always been 100%JRNY and made the right choices, was notably absent from the West Wing appearance. As an impressively thorough blog post at Ultimate Classic Rock points out, he has spent the last several days in a spasm of social media updates, expressing his displeasure with the situation and implying that it might mean the end of the band. A small sampling is below.

How would you feel if u found out that the rest of the band wanted to tour without me? I've always been 100%JRNY and made the right choices

Exactly! Even if I objected. I should have been told by any band member or Managment. I started and brought in all these guys. Lame https://t.co/rUvNDj6j6q

Yes I am and you still miss the point. Arranged photo op against what we've all stood for up until 2 years ago and Jon changed radically https://t.co/x7GdWtiZux

In the middle of the deluge, he stopped to opine about the relative merits of extremely expensive Italian sports cars.

Yes but the new Lambos have 0 problems https://t.co/O8sCSN6nYe

And then he continued tweeting about his band.

Not stirring the pot. It's now time for the truth all I have endured this year, enough is enough. Exposing any abusive, malicious behavior https://t.co/MNM3vVUysO

And so on. Schon says his beef is not with Trump per se, but the fact that his bandmates declared symbolic allegiance to any political figure at all. (“We’ve been asked many times” to appear with the Obamas, but turned them down, he tweeted at one point.)

If you don’t keep yourself fully up-to-the minute about the intraband vagaries of the guys who wrote “Separate Ways,” it helps to consider this latest outburst as the climax of simmering tensions between Schon and keyboardist Jonathan Cain, who joined the band in 1980 (He’s the “Jon” who Schon says “changed radically” in the tweet above.) Since 2015, Cain has been married to Paula White, a megachurch televangelist who is Trump’s personal minister and chairs his administration’s evangelical advisory board. According to Ultimate Classic Rock, as Cain has become “increasingly religious,” Schon has “pushed back,” worrying that the keyboardist was encroaching on the band’s longtime stance against incorporating religion or politics into their music and public image.

But Cain isn’t the only member who’s embraced the 45th president. Singer Arnel Pineda joined in 2007, the latest in a succession of frontmen who have attempted to fill the shoes of Steve Perry, who departed in 1998. Pineda was at the White House appearance, and approvingly posted about it on social media after the fact.

The current schism seems to have put Schon in a wistful mood about his collaborations with Perry, and he’s tweeted several times about his relationship with his old partner.

When I hear my guitar I hear his voice. From Infinity on … Timeless Forever…The sound and soul of Journey pic.twitter.com/5FPhRzxRw4

For all the havoc that Trump has wreaked already in his first seven months of president, maybe this will be the silver lining: getting Neal Schon and Steve Perry back together again. Don’t stop believin’!

UPDATE (August 10): A previous version of this post identified Schon as “Journey guitarist and co-founder.” A publicist for Schon informed SPIN that “Neal is the sole founder of the band, and members were wrapped around him to create the band when they started.” SPIN regrets the error.