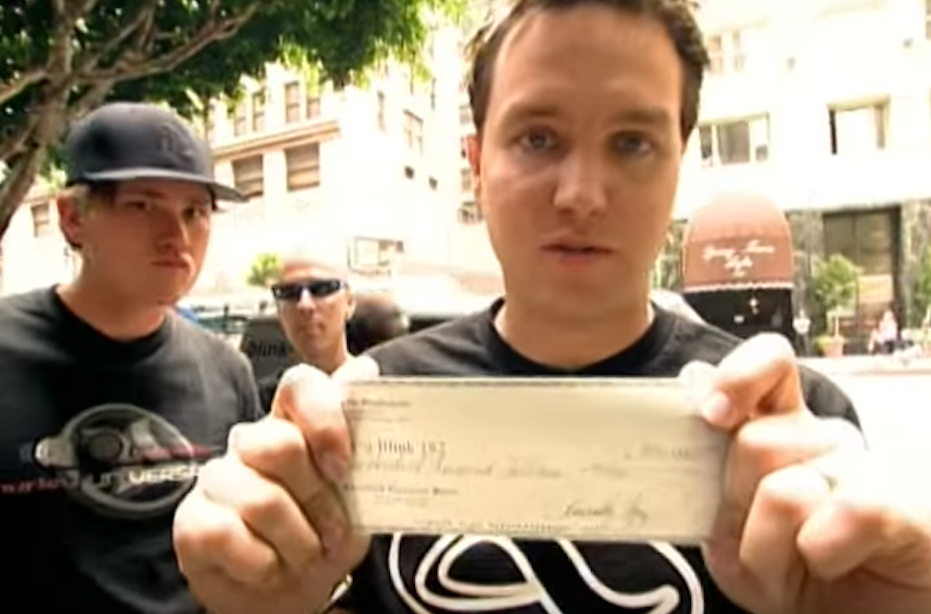 Earlier this week, our colleagues at Billboard released a list of the 100 Greatest Choruses of the 21st Century, an audacious undertaking that highlighted the most memorable pop, rap, R&B, dance, rock, and country hits since the year 2000. Of course, picking only 100 over that 17-plus year period meant a lot got left on the cutting room floor, including some of the most iconic pop-punk choruses of the time, ones which left an indelible imprint on millennials, for better or worse. The following is our list of the 21 best pop-punk choruses of the 21st century, with our boundaries including where pop-punk bled into emo, and also into pure pop. Enjoy, and call up your old friends and sing these to them over the phone, or at least send them the Spotify playlist at the bottom of this post.

The history of anthems would suggest that it is inadvisable to actually title your prospective anthem “The Anthem,” much less to inform listeners that “This is the anthem,” right there in your anthem’s chorus. “The Star-Spangled Banner,” after all, is just a poem Francis Scott Key wrote one night in Baltimore, set to the tune of an old drinking song. But if you move your map just an inch or so down, to the small and inauspicious towns just south of that historic city, like those from where Good Charlotte sprung, and you set your sights not on the entire United States, but on an invisible nation populated entirely by spiky-haired suburban dirtbags like you, “The Anthem” might do just fine. Throw your damn hands up. Shout out to Madden 2003. — Andy Cush

It’s hard to remember that there was a time when Against Me! were declared to be full-on sellouts for signing to Fat Wreck Chords, much less Sire, the major label with whom they released New Wave, which was named our album of the year back in 2007. After years of edging their punk songs toward the radio’s center, the band went full-on pop by leaning into their instinct for crafting giant, singalong hooks. The harmonizing on “Thrash Unreal” isn’t too complicated, but it’s melodically irresistible—you’d forget that it’s an actually sort-of-depressing song about a junkie Laura Jane Grace used to know, who eventually died. (Grace eventually wrote a mea culpa for the song’s subject on “Because of the Shame.”) Perhaps not surprisingly, became their best charting song to date. — Jeremy Gordon

The Canadian band Simple Plan stepped into pop-punk stardom with perhaps the genre’s most quintessential album title—No Pads, No Helmets… Just Balls—which emphasized two very important things: they were boys, but not popular athletes. As such, “I’d Do Anything” made sense as the album’s biggest hit, a loser’s plea to an unnamed girl to recognize that he, really, is the perfect one for her. “I’d do anything / Just to hold you in my arms” it went, in a perfect ascending adolescent whine, and driven by an encouraging guitar riff that seems to say, “Hey man, maybe you have a chance.” Ha. — Jordan Sargent

British and perpetually in love with everything and nothing simultaneously, the 1975 wrote the best early hook of their careers when they narrowed their ambitions to matters of the body and the petty. “She’s got a boyfriend anyway,” Matt Healy unconvincingly chants to himself about a romance just past his reach. He sings about this not as a conscious failure, but as if it’s caused by some inherent wretchedness. The 1975 long ago distanced themselves from any notion of pop-punk, but they were awfully good at vocalizing its ethos. — Brian Josephs

“Right Now” by SR-71—the now-obscure, well-hair-gelled Baltimore rockers who named themselves after an Air Force spy plane—seems so perfectly shaped, effusive, and effortless that one can’t help but feel the boys knew it would be their only hit the moment they happened upon it. The pre-9/11 pop-punk classic is a songwriting masterclass. It’s not just the refrain; the song is comprised entirely of catchy fragments, like the eminently hummable guitar riff that is the song’s sneaky second hook, and the irreverent calls of “now that’s over” that punctuate the verse. But its the chorus that soars highest—full of musical humor as well as the expected, if gleeful, misogynistic angst, exalted by the against-emphasis phrasing of “‘til we see eye to / Ey-ye” and the eternal, petulant “Why” that sets the whole thing off. “I used to be such a nice boy,” band leader Mitch Allan croons disingenuously later on, but it’s impossible to believe him. — Winston Cook-Wilson

All-American Rejects are in many ways an embodiment of a pop punk’s oxymorons. Are your really that alone if everybody experiences that same yearning? Are you really a reject if you’re, you know, All-American? But no matter: Their debut single “Swing, Swing” casts away all the maudlin sentiments with its wistfully melodic hook. “Do you know what it feels like, being alone?” Tyson Ritter bitterly asks, but by the end of the hook, you at least feel like things aren’t so bad. — BJ