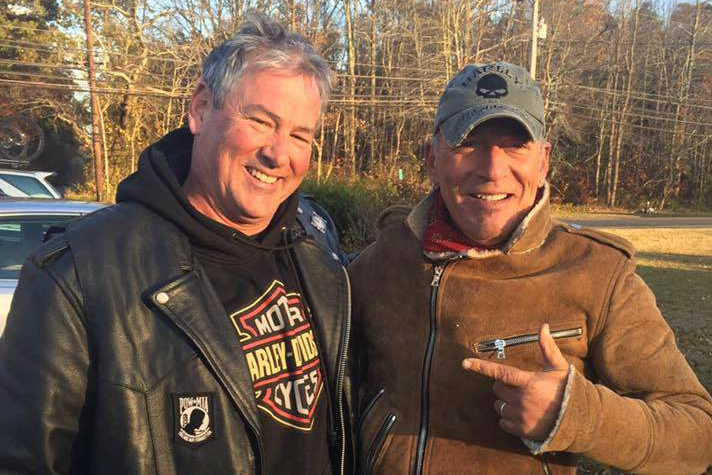 Yesterday, New Jersey’s Freehold American Legion Monmouth Post 54 Facebook page shared a feel-good story from the Legion’s motorcycle club: On Friday, some of its members were riding back from Veterans Day celebrations when they saw another motorcyclist broken down on the side of the road. They stopped to help, and the other guy turned out to be Freehold native and living American legend Bruce Springsteen.

They couldn’t fix Springsteen’s bike on the spot, so one of the vets put the Boss on the back of his bike and the whole crew went to a local bar to wait for his ride. “We sat there and shot the breeze for a half hour, 45 minutes till his ride showed up,” Legion member Dan Barkalow told NJ.com. “Nice guy, real down to earth. Just talked about motorcycles and his old Freehold days.”

At first, the Facebook post garnered positive attention. Before long, the comment thread devolved into a ugly online brawl where steamed-up Donald Trump voters attacked Springsteen for opposing him, loyal patriots complained that Legion Riders had helped a liberal, and everyone argued about whether or not Real Americans ought to leave other people stranded.

Frustrated, Post 54 added a note pleading for peace: “What started out as a story of interest posted to our American Legion Facebook page has devolved into a nauseating political altercation full of vitriol and insults, none of which are from our members,” they wrote. “If we are to survive as a nation both sides have to stop the hate.” The fight is still going, though. (Most recent comment: “I wouldn’t lift a finger for that Hillary-lovin’ a-hole!”)