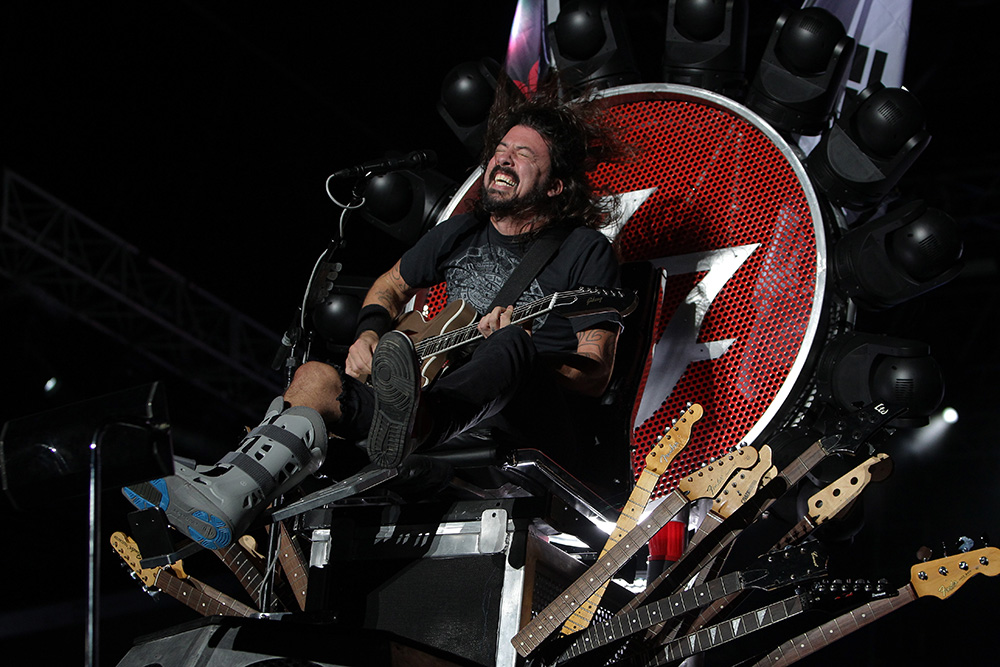 Now, nobody on the SPIN staff is a doctor, but we have some doubts about Dave Grohl’s latest DIY physical therapy. After breaking his leg in a nasty fall in June, the Foo Fighters frontman has been forced to perform from atop a mighty throne, and to play drums with his right leg.

“It’s funny, ever since I started playing the drums my right calf muscle has been twice the size of my left from stomping the hell out of my kick drum pedal,” he told Q. “”Now it looks like a sad little chicken wing.” To help bulk up, Grohl says he’s been “air drumming along to Led Zeppelin three times a day.”

Grohl also told the magazine that he “cried like a f—king baby” when he saw Florence + the Machine’s stirring tribute to him at Glastonbury. “It melted my f—king heart. I am forever indebted to them. It meant so much, you have no idea.”

It's surprisingly easy to forget about Led Zeppelin in 2014
MORE >>

In yet more “Dave Grohl is a pretty good guy” news, the former Nirvana member signed a 12-year-old fan’s cast. According to The Tewsbury Town Crier, little Henry Pestana got Grohl’s autograph at the Foo’s recent concert at Boston’s Fenway park. Pestana had busted his wrist in a skateboarding accident, which seems fitting. “It was motivational for me to see that even though he broke his leg, he can still put on a show and have fun,” Pestana told the paper. (h/t Alternative Nation)