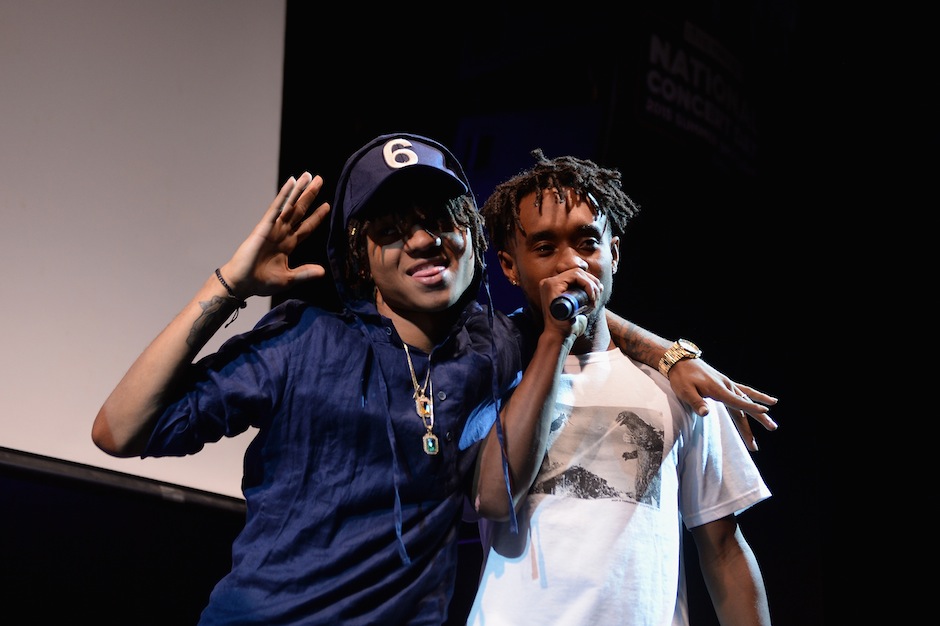 Rae Sremmurd’s  Aaquil “Slim Jimmy” Brown has reportedly broken his leg onstage during the band’s set on the first day of Governor’s Ball 2015.

According to SPIN staffer Brennan Carley, who watched the entire thing happen, Slim Jimmy jumped from the main stage onto a platform and slipped. He describes the whole thing below.

“Somehow [he] got glass in his stuck in his leg and had to clamber back onto the stage. He was inspected by doctors and was bleeding profusely through his bandaging. He then had to get carted off on a stretcher by medics. Swae Lee is finishing the show on his own.”

It is unclear at this moment how serious the injury is. SPIN has reached out to GovBall representatives for comment and will keep you updated on the situation.

Update: GovBall has released a statement regarding Jimmy’s accident:

After suffering an injury, Slim Jimmy was taken immediately to a nearby hospital where he’s in stable condition. The safety of our artists and visitors is our number one priority and our medical team was able to address this issue quickly and effectively.

@jxmmis is doing ok thanks to all the fans #GovernorsBallNYC2015

Update: VIBE has a video of Jim being helped offstage.

Video of slim jimmy being helped offstage after injuring himself at #govball2015 #vibeonsite   A video posted by VibeMagazine (@vibemagazine) on Jun 5, 2015 at 11:25am PDT

Slim Jim hopped off stage and got a big ass piece of glass in his leg. Rae Sremmurd be too turnt ! #GovBallNYC

Ouch! RT @whatevernicole ONE OF THE GUYS FROM RAE SREMMURD JUST FELL OFF THE STAGE AND SPLIT HIS LEG OPEN OH MY GOD — PK is 4 K2Blue (@LoKatdotCom) June 5, 2015

Breaking news: slim Jim from @RaeSremmurd just broke his leg onstage and the show is still going on. #governorsball #yourdoinggreat

Slim Jimmy from Rae Sremmurd just fell off the Gov Ball stage and broke his leg. The main stage is chaos. This rain is destroying the show. — Brennan Carley (@BrennanCarley) June 5, 2015