Home » SpinTV » Spotlight » The Sound and the Furry: Making a Psychedelic Muppet With Dan Deacon

“Do I have to put the eyes where the eyes go, or can they go anywhere?” Dan Deacon asks, looming over a mess of dismembered puppet parts. The Baltimore-based electronic composer stands amidst stuffed animals and action figures at Manhattan’s FAO Schwarz toy store where he’s come to construct a Muppet — or maybe play God.

The Muppet Whatnot Workshop? is tucked away in a fairly small corner of the massive toy emporium, a floor below the famous Big piano and behind a candy section that’s almost certainly been the cause of hundreds of toothaches. One must dodge toy helicopters and bouncing balls to get back there. (“God, it’s such a dark future,” Deacon says as a plastic drone buzzes over his head.) Deacon is hard at work selecting body parts from a sticker book: a colorful fuzzy torso, eyeballs, a nose, and hair alongside various accessories like a princess costume or a mean set of fangs. Standing over the workbench with a bushy beard and simple round glasses, he somewhat resembles a younger, casually dressed Santa Claus ready to get to work making toys. 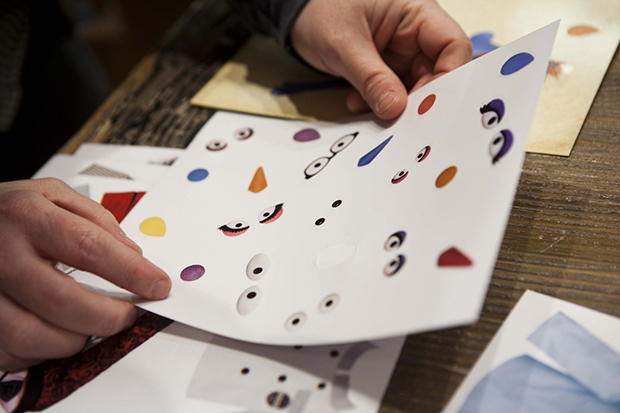 Deacon isn’t the only adult to take advantage of the Whatnot Workshop — plenty of so-called grown-ups play around with the sample Muppets, and although the word’s most famous toy store is surprisingly uncrowded this Monday afternoon, there are plenty of children underfoot.

He is, however, the only psychedelic, absurdist musician at the Workshop. A few months earlier, the 33-year-old announced his fourth studio album, Gliss Riffer, with lead single “Feel the Lightning” and its colorful music video, featuring outlandish abstractions and fornicating furniture. Director Andrew Jeffrey Wright visualizes Deacon’s technicolor soundscapes nicely — imaginative, jolly, but definitely twisted. His latest LP harkens back to his earlier recording days; all of the madcap electronic riffs are a product of Deacon’s computer — and mind — alone. He makes music that’s playful, yet subtly perverse, and his approach to puppet-making appears to be the same.

The Workshop employee who will be doing the actual construction of the bespoke Muppet could, potentially, refuse to go along with some of Deacon’s more imaginative ideas. Luckily, the affable Minnesotan overseeing Deacon’s Muppet construction is game to indulge his whims. There are some rules the Muppetmaster can’t let the Wham City founder break, however. “You only get one pair of eyes,” he says, nixing any chance at a spider-Muppet. He makes up for it by helpfully suggesting a shaggy pair of “whooshy monster brown eyes” that might be to Deacon’s liking. (Sadly, they were not.)

The final mock-up for Deacon’s Muppet looks like something out of Pan’s Labyrinth — only cuddlier, in a pathetic sort of way. Equal parts cute and grotesque, the little guy would fit right in with the fanciful cast of the “Feel the Lightning” video, or alongside the green, eyeballed hand that adorns the cover of Gliss Riffer. The bizarre look of the hand, designed by Baltimore artist Joanna Fields, is cartoonish yet fundamentally unsettling. “I liked that it had a playful nature to it, but it’s also tortured. It’s kind of being f**ked with by those flower people,” he says, careful not to swear too loud in the middle of a toy store. The closest children are too busy checking a display of plastic toy monsters that are part of some video game, and appear not to have noticed the curse.

“I think that’s a lot of what psychedelia is,” Deacon continues, casually exploring the store while the workshop employee assembles his Muppet. “I think a lot of people are just like, ‘It’s fuzzy bears.’ But it’s not, that’s crazy.” Beneath the glorious and intricate layers of high-flying synths that make up Gliss Riffer there’s a vague but lingering unease. This, Deacon says, is what psychedelia is all about. It’s “something that runs the gamut of good and bad without applying to the human element of good and bad.” It’s big and loud, but not empty and wacky — a descriptor that Deacon dislikes. His preferred term is euphoric. 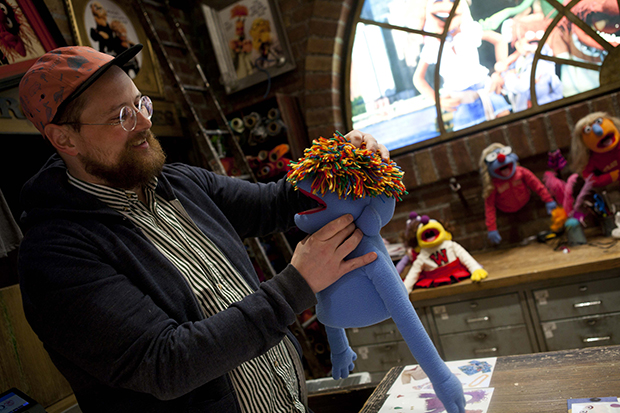 Seeing as Deacon spent the past couple of years conducting vast ensembles and even scoring a couple of scary movies (like Francis Ford Coppola’s Twixt and the disturbing Adult Swim short Unedited Footage of a Bear), Gliss Riffer is in many ways a return to his roots — it’s Deacon’s smallest album in some time. His previous two releases, 2009’s Bromst and 2012’s America, were both huge endeavors employing numerous live musicians to achieve a complex “electro-acoustic” sound, enhanced by human imperfections. Gliss Riffer, in contrast, is all Deacon. He was messing around with a new program while touring in support of America, and he became intrigued by both the simplicity and limitations of a smaller-scale project. “Working with a really limited palette of what exists inside my computer, or already in my studio that I can do on my own, became very exciting,” he recalls.

He may have scaled back for this album but make no mistake — it’s still hugely ambitious in scope. Deacon packs on heaps of frantic, exuberant synths; the title, Gliss Riffer, comes from the musical term glissando, which means gliding up and down streams of notes. Deacon hits these electronic slopes hard, and the cascade sounds both whimsical and meticulous at once. 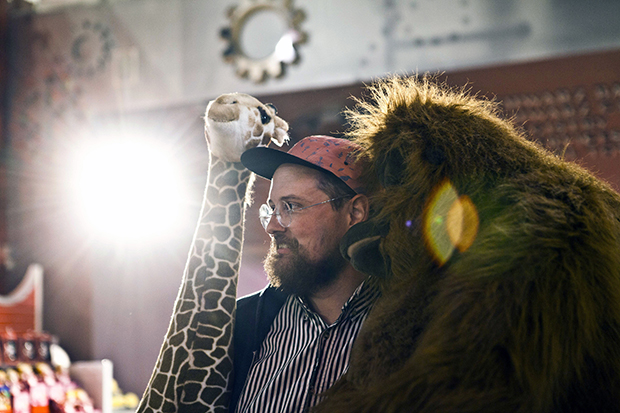 Working with live musicians on past projects was a learning experience, and it made him much more aware of the logistics and sheer volume of sound he was working with even though he was once again by his lonesome. “I didn’t really think about density maturely until I started working with acoustic instruments,” Deacon explains, referring to the making of the bombastic hyper-concert that is Bromst. “So, when I first wrote a piece for orchestra, I was like, ‘I can’t just have every instrument play at full volume, because you’ll only hear the trumpets. You’re not going to hear anything else.'”

It wasn’t until Gliss Riffer that he applied those lessons to electronic music. “I made America with acoustic instruments, but treated them like electronic instruments,” Deacon says. “Whereas in this record, I wanted to do the exact opposite.” 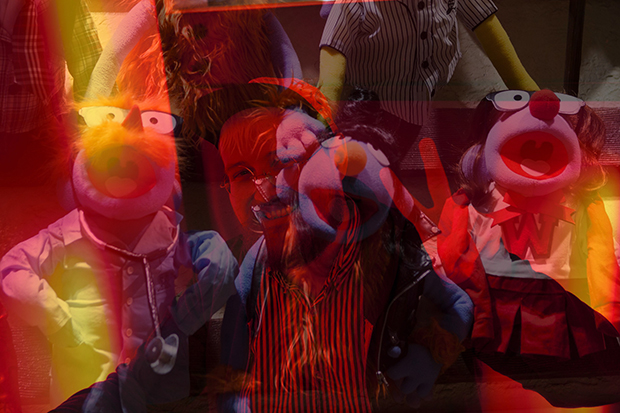 When Deacon recorded his breakthrough LP, 2007’s wiry Spiderman of the Rings, working alone was natural, but isolation was unfamiliar and stressful by the time of Gliss. There were no other ears for him to consult. He worried if he was too close to every stage of the recording process to accurately evaluate the tracks, and he was plagued by a growing sense of self-doubt. Decision paralysis set in as Deacon worried that the album wouldn’t be good enough, that he would let people down. “This had been the first time since 2006 that I was sitting in a studio making something, and I was like, ‘I can’t f**k this up,'” he recalls.

The record was almost done save for some difficult, final mixing decisions when Deacon happened to catch an interview the beloved actor (and mythical party crasher) gave at TIFF, where he explained his work philosophy. “You have to remind yourself that you can do the very best you can when you’re very, very relaxed, no matter what it is, whatever your job is,” Murray advised during the September Q&A session. “The more relaxed you are, the better you are.”

Standing in the shadow of a massive plastic gummy bear, Deacon makes an explosion noise to convey the magnitude of his realization. “I always used stress as a motivator,” he remarks. “Seeing that, I was like, ‘That’s a terrible way to live!'” With Murray’s sage advice, he was able to have fun with the record again. “It really helped me finalize the tracks, just not giving a s**t. I was like, ‘I don’t care how this is received, I just want to make it the best I can.'” The new, Zen-Deacon was able to just quickly decide what version out of 80 some odd options to go with for a song that he appropriately decided to title “Learning to Relax.”

After wandering around FAO Schwarz for a while, and getting excited though ultimately underwhelmed by the geode cracker in the store’s mineral and fossil section, it was finally time for Deacon to see his finished Muppet. The final result would have likely left Jim Henson beaming with pride or downright horrified. The furry monster’s chest and shaggy rainbow beard were one thing, but it was putting the eyes on what were clearly meant to be ears that really made Deacon’s Muppet. The employee explained that the ever-imaginative Henson liked to stick to the “magic triangle” — positioning the eyes so that there was a central focus point. Deacon elected to adhere to a very different shape, and it’s unlikely that his Muppet would actually be able to see past its bushy beard given how low and far apart its eyes are.

Deacon’s psychedelic, friendly monster does not look like a thing that’s supposed to exist, but damn if it isn’t fun to play with. The same, perhaps, can be said about Deacon’s music. The palette is weird, it’s a little twisted, but it’s a blast. And like Gliss Riffer, Deacon had to eventually let his Muppet go. It’s destined for a children’s hospital, where his kaleidoscopic beard and hairy chest will entertain and quite possibly confuse little kids who won’t know what to make of him. He’s pretty absurd, sure, but if Deacon’s experiemental tunes are anything to go by, that’s often the most rewarding type of fun. 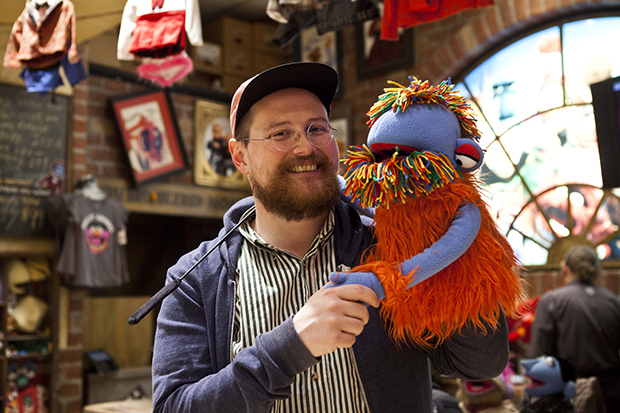