Fresh off of winning a Grammy for Best Alternative Album, St. Vincent — a.k.a. Annie Clark — wrote a long thank-you email to her fans. In addition to thanking her managers, collaborators, publishers, and labels for their years of support, Clark recalls her earliest days on the road, which were, well, pretty unglamorous.

“i have eaten years of veggie subway sandwiches on highways 10-90,” she writes, “stayed at a super 8 motel behind a kansas federal prison, peed in cups in dressing rooms when there was no bathroom, gotten eaten alive by bedbugs at a cincinnati days inn. i would not trade a single highway or city or moment or person i met for anything. i have loved it all.” Read her full letter below.

in 2007, i signed to beggars banquet records. i was living in dallas, texas in my childhood bedroom at the time, which i had fashioned into a makeshift studio in order to record some of what would end up being my debut album “marry me.”

the first days of touring my own songs and as “st. vincent” are very vivid. in early 2007, in anticipation of the release of my record, my (much beloved) agent put me on the road as solo support for jolie holland and midlake. he saw potential in me, but rightfully, thought i needed to get my live act together. get comfortable playing for people. get road-tested. like most of the rest of my career, it was a trial by earth, wind, and fire.
i was performing solo; just my voice, a guitar through an array of effects pedals, a “stomp board” — a homemade device i made out of a piece of plywood and a contact microphone that i ran through a bass EQ pedal, and a keyboard. i thought the keyboard looked unmysterious on it’s own, so i designed a lighted wooden enclosure to go around it. my brother-in-law helped me build it in his garage. it weighed a gazillion pounds and gave me splinters to carry, and i don’t think anyone was under any illusion that there was anything but a keyboard inside it. neither the first nor the last in a series of hilariously ill-fated ideas. 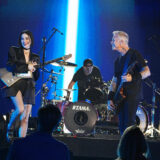 january 2007, i borrowed my father’s station wagon and drove 12 hours from dallas to frozen lincoln, nebraska to open for jolie holland (what a voice) at a half-full 150 capacity carpeted club. i believe the compensation was $250/gig but it could have been as much as $500 — more $ than i’d ever seen for a gig for sure and guaranteed, no less! in my memory, this midwestern jolie tour dovetailed right into opening the midlake tour. they were out in support of their excellent record, “the trials of van occupanther” and were the sweetest good texas boys you could ever hope to meet. the drummer of midlake, mackenzie smith, would later prove to be a great collaborator, playing on actor, strange mercy, and st. vincent.

on this tour, i’d enlisted my dear friend, jamil, to come and sell merch and help do the long drives. we’d just played a show in detroit and while we’d been inside, a blizzard had swept through and covered the stationwagon in snow and ice. it was treacherous. jamil, who always had some incredible hustle going, hired a homeless man named larry to dig the stationwagon out of the snow. (in college, he had a gold lexus, stripped it of the good parts, and resold it. when i asked if he was sad to see it go, he said, “girl, they think they bought a lexus but they bought a corolla.”) i’ll never forget driving out of bombed out-detroit, apocalyptic at 1 AM. interstate 94 tense and quiet, jamil trying to make sure we didn’t crash or stall on the icy road.
i have eaten years of veggie subway sandwiches on highways 10-90, stayed at a super 8 motel behind a kansas federal prison, peed in cups in dressing rooms when there was no bathroom, gotten eaten alive by bedbugs at a cincinnati days inn. i would not trade a single highway or city or moment or person i met for anything. i have loved it all.

i’m very grateful to have received this grammy. thank you to my producer john congleton, thank you family, thank you friends, thank you to all the incredible musicians involved, thank you managers and agents and publishers and labels and publicists and everyone who works hard at their jobs. and thank you guys. thanks for everything.