Q&A: Kate Pierson on Writing Her Solo Album With Sia and Getting Kicked Out of Her Own Show

Home » Features » Interviews » Q&A: Kate Pierson on Writing Her Solo Album With Sia and Getting Kicked Out of Her Own Show

Singing “Rock Lobster,” “Roam,” “Love Shack,” and other recognizable staples in her long-running “dance band from Athens, Georgia,” the B-52s, Kate Pierson has long been one of the most lovable personalities in the music business. Juggling an array of instruments in the B-52s’ wacko evolution from reverberating, surfy post-punk into all-inclusive party-pop, Pierson and her bandmates spent most of the 1980s as well-respected oddballs who could do silly (“Dance This Mess Around”) and serious (“Give Me Back My Man”) without losing a beat of their instantly recognizable signature sound.

The tragic, AIDS-related death of guitarist Ricky Wilson at age 32 threatened to stop their career completely, but drummer Keith Strickland taught himself guitar and the surviving members of the band returned with the biggest hit of their career, 1989’s Cosmic Thing. Despite lots of touring, the band’s recorded output has been sporadic since then, with a best-of (1998’s essential Time Capsule) and only two studio albums, the most recent of which, 2008’s synthadelic Funplex, is good enough to stand with any of their best (“Juliet of the Spirits”!).

Because Pierson’s clarion harmonies have also adorned hits by everyone from Iggy Pop (“Candy”) to R.E.M. (“Shiny Happy People”), she’s the band’s most likely candidate for a successful solo career. Her first go-it-alone album, Guitars and Microphones, is out February 17, and ranges from sprightly rock (first single “Mister Sister”) to swooning balladry (“Crush Me with Your Love”), with contributions from the Strokes guitarist Nick Valensi and three songs written by none other than SPIN 2014 Artist of the Year, Sia Furler, who also served as executive producer. We sat down with Pierson to discuss the making of the record, including the surprise controversy of “Mister Sister” and the process of collaborating with Furler and her own partner of 12 years, Monica Coleman.

Why did you only decide to do a solo record now?
Well I mean, the B-52s has been kind of all-consuming. You know, we started early in ’76. We toured a lot. I’ve always wanted to do a solo record and in 1999, I went over to Japan and did a project called NiNa, where I co-wrote with Yuki from Judy and Mary. It just sort of unleashed this realization in me that I could write. I used to have a protest folk band in high school and I wrote all my own songs, then in the B-52s we would write collectively. 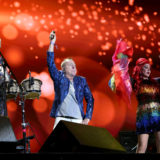 So I started writing a whole bunch of songs and I was about to release a solo record quite a while ago in, probably, 2005. Then the band decided to put out Funplex. So I got involved in that instead. Now the band is really not touring much; we’ve really slowed down. Keith [Strickland] in our band quit touring. He’s still part of the band. And now Fred [Schneider] and Cindy [Wilson] don’t want to tour much so this is just the perfect opportunity. It’s something I’ve always wanted to do but never could get it out there into the public. I believe it’s easier now in a lot of ways because things are cheaper, the recording process is cheaper and just a lot of do-it-yourself kind of stuff.

Did you have old songs stockpiled for Guitars and Microphones or you started writing from scratch?
Totally starting from scratch. The stuff I did for the first solo album I wanted to put out just seemed dated. I was writing stuff about myself with some other people anyway, so I started writing with Sia. We moved out to L.A. for a period of time and pretty much every day we went on a writing session, we’d do a song and get a great demo. There were a couple of songs I did when Sia started getting really busy and started writing for, you know, Beyoncé.  She said, “I just totally have you in mind” when she wrote the song “Bring Your Arms.”

Is Sia a very personal writer, like, she doesn’t shop songs around to different artists?
I don’t know if she collaborates on everything but she always gets in tune. She has an uncanny knack for tuning into somebody’s psyche and knowing the type of song — and also their emotional feeling — about it. So it feels like you had written it or it’s the song you wish you had written or you feel like it suits you perfectly.

Were there specifically things you thought you couldn’t do in the B-52s?
I just wanted to be more real and emotional. The B-52s, you know, our songs are about volcanoes or lobsters. Cindy and I sing them like our lives depend on them. I feel very emotional when I’m singing “Rock Lobster,” but I’ve wanted to sing more about my personal experience. I had a lot of lyrics. I had a lot of ideas for titles. We used most of those. With the B-52s, we would jam together. We might jam for days on one song and then we come back to it and then we’d jam more. Hours of jams. So much stuff we could make ten songs out of one. But with Sia we would pick the best parts, so it was more like a collage: If you feel like it’s not good then move on. Sia has a great way of adding her own lyrics to mine and shaping them to the melody we came up with.

Are there B-52s songs that aren’t well-known as “personal?”
Well they… are. Especially on Cosmic Thing, I think “Deadbeat Club” is very personal. There are songs that are very emotional; “Roam” actually. But I guess now it’s just my direct experience, not a collective experience. In the B-52s, each of us has our own wacky sensibility, which when we come together, it’s like the four-headed monster. And it’s great because we have the same sense of humor.

Comparing love to “squirrels in my head” on “Things You’ve Done” is one of the quirkiest moments of your career, I think.
That is totally a Sia line and she wrote that song. And my partner Monica came up with the title “Crush Me With Your Love.” When Sia writes, she asks, “What are you thinking?” Monica was a photo agent in a former life and she ran a wool store in Woodstock. She runs our two hotels, Lazy Meadow and Lazy Desert, and she did all the photos and the album cover and she is playing guitar with me and she does pottery and she knits and she’s managing. Talk about squirrels in your head. She’s one of those people that just does so many things, you know, she’s really working on trying to stop. That was kind of a reference to trying to be here now, trying to calm down, do meditation. But it is a great line, isn’t it?

Guitars‘ opener, “Throw Down the Roses,” has this message that you don’t need any special kind of access to do what you want.
I think both Sia and I have had that experience. It’s really dismal when you’re backstage and — even Cindy and I were kicked out of our own concert because we didn’t have the right backstage pass. This was a long time ago at some old club. We were like, “We’re supposed to go onstage” and they’re like, “You don’t have a pass!”

How did “Mister Sister” end up being about the trans experience?
Well, that’s a really unusual sort of dilemma that came up. Because it’s not really about a transgender person. And I actually have a manifesto here. [Takes out a prepared note.]

By all means.
Huffington Post had just asked me for a quick quote, and we had just put out the video and this trans woman had just wrote on my Facebook page: “This is so empowering. I love this song. I think it should be a trans anthem.” And my quote was, “I hope it becomes a trans anthem, but it’s really meant to empower anyone who feels betrayed by the mirror.” I was just trying to use “trans” as this kind of umbrella term meaning anyone in the gender spectrum. It was definitely not about specifically a transwoman. It’s really about a little boy who wants to play with his inner girl. He could be a future drag queen or a future transwoman, or it could be about a girl who feels betrayed by the mirror.

It could be about a boy who’s going to be a poet or musician. It’s a universal kind of thing. When Huffington Post quoted it, when I said “trans,” they put in parentheses “gender” and it got picked up by a lot of the — let’s say more vocal fringe — of the transgender community. I received a lot of… How can I put it? Some damning [criticism]. It was really negative. The B-52s have spent our whole career fighting for rights of people who feel different or LGBT, the whole gay community, you know. I had a dialogue with a couple of the more radical people on Facebook and I just gave one quick answer basically to reiterate my quote. I didn’t want to write an open letter. I composed a whole letter and then it just seemed like no matter what I did it would be construed [the wrong way]. That being said, I really learned a lot. My partner Monica started this one dialogue on Facebook. It was really enlightening. I mean the whole thing, most people don’t know what “cisgender” or “TERF” is or what all these terms are. Even my gay friends!

Was it a total shock how that ended up happening?
I had no idea. I had no idea. First of all, I didn’t understand the specificity of “trans” and that was something that was very important for them. I totally understand it and I feel for them: People lump them in together, they’re trying to find a voice that is actually heard. But I didn’t expect that sort of backlash.