Studio version will appear on full-album remake of 'Sgt. Pepper'

Back in March, the Flaming Lips and Miley Cyrus got together in the studio for a weed-fueled session that produced a cover of the Beatles’ “Lucy in the Sky With Diamonds.” It’s part of a star-studded, full-album remake of Sgt. Pepper’s Lonely Hearts Club Band by the Lips, and they previewed it last night at Cyrus’ gig at Manchester, England’s Phones4u Arena.

According to Lips fan site the Future Heart, the performance of the song was filmed, possibly for the Billboard Music Awards, with Miley, Wayne Coyne, and Steven Drozd playing the cover three times in a row to make sure they got a good take. “You guys gotta pretend like you like it every single time, okay?” Cyrus tells the crowd before the first rendition, which you can see up top. It’s a bit blurry, but Coyne is the one in the silver-looking cape, while Cyrus is the gold shape. Overall, the cover is pretty faithful to the original, with some modern psychedelic effects added and other sections drawn out. It’s hard to tell for sure, because at one point Cyrus misses her cue, leading her to say, “We’re gonna do that again because I f—ked that shit up.”

The studio version of the cover will appear on With a Little Help From My Fwends, the Lips’ Sgt. Pepper remake. Aside from Cyrus, guests include Sean Lennon, MGMT, Moby, Foxygen, My Morning Jacket, and Phantogram, among others. It’s due out October 28 via Warner Brothers, with some proceeds going to the animal-care non-profit Bella Foundation, which is based in the Lips’ hometown of Oklahoma City. Starting May 18, fans can pre-order the LP and get an instant download of the “Lucy” cover. Check out the trippy album art below. 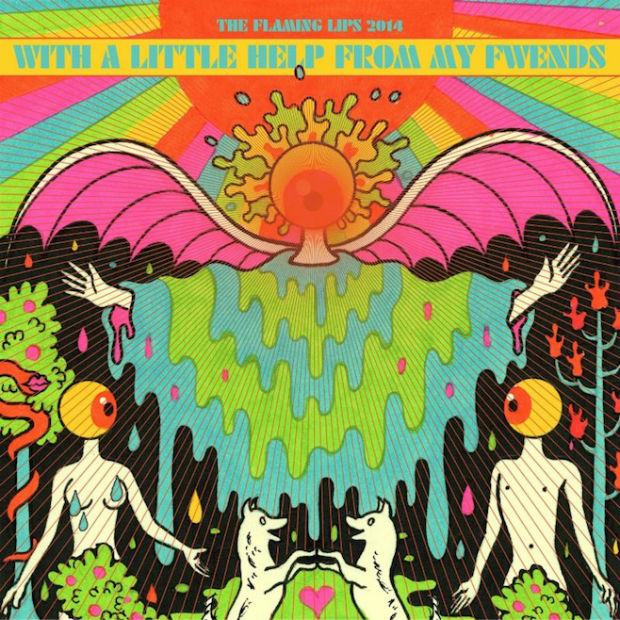