"Lucy in the Sky With Diamonds" remake is part of 'Sgt. Pepper' album tribute 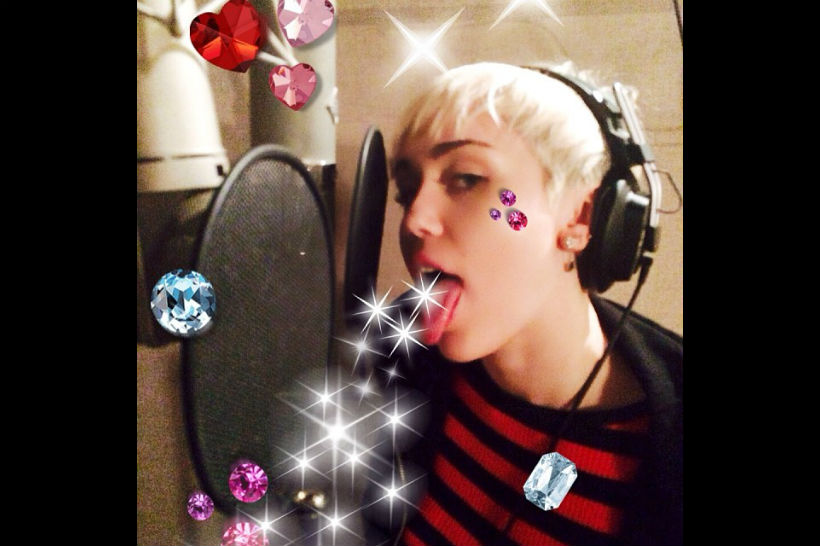 Last month, the Flaming Lips’ Wayne Coyne and Steven Drozd joined Miley Cyrus onstage to perform “Yoshimi Battles the Pink Robots Pt. 1,” a collaboration that makes sense when you remember both acts’ love of the bizarre. The bond was strong enough for Coyne and co. to invite Cyrus to perform on their full-album remake of the Beatles’ Sgt. Pepper’s Lonely Hearts Club Band, on which she sings “Lucy in the Sky With Diamonds.”

Coyne himself broke the news by posting photos of Cyrus in the studio with them in Tulsa, Oklahoma. “Miley in the studio vomiting diamonds while singing Lucy In The Sky With Diamonds!! If you’re a Beatles and John Lennon freak you gonna love love love this track!! Got Andrew from MGMT too!!!!” he wrote in the caption for the above photo. Judging by the one below, plenty of weed was involved, with Miley crafting a joint using her very own Bangerz rolling papers. According to The Future Heart, they’re also working on original tunes too, but they have yet to announce any official releases.

“I hope I could inspire you guys as much as the Flaming Lips have inspired me and encouraged me to always be myself and to make music because I love it,” Cyrus told the crowd when the Lips joined her at Los Angeles’ Staples Center. Speaking of that show to the Tampa Bay Times, Coyne said, “Anybody that does writing, painting, music, anything, they know that the enemy of all that is the desire to be taken seriously. That’s why last weekend we were out with Miley Cyrus, because the idea that you just don’t give (an expletive) is where you get all your power.”

The Lips’ haven’t revealed any more details of their Sgt. Pepper’s remake, but they previously recorded a cover of “Lucy in the Sky With Diamonds” preceding their New Year’s Eve show in Aspen. Meantime, they’ll be unveiling an edited-down version of their 24-hour song “7 Skies H3″ for Record Store Day. That collector’s edition vinyl pressing will apparently run 43 minutes, perfect for any fans who don’t have a full day to spend listening to one track. Meantime, check out their “Lucy” cover below.