From the pre-game to the Halftime Show, and all of the commercials along the way 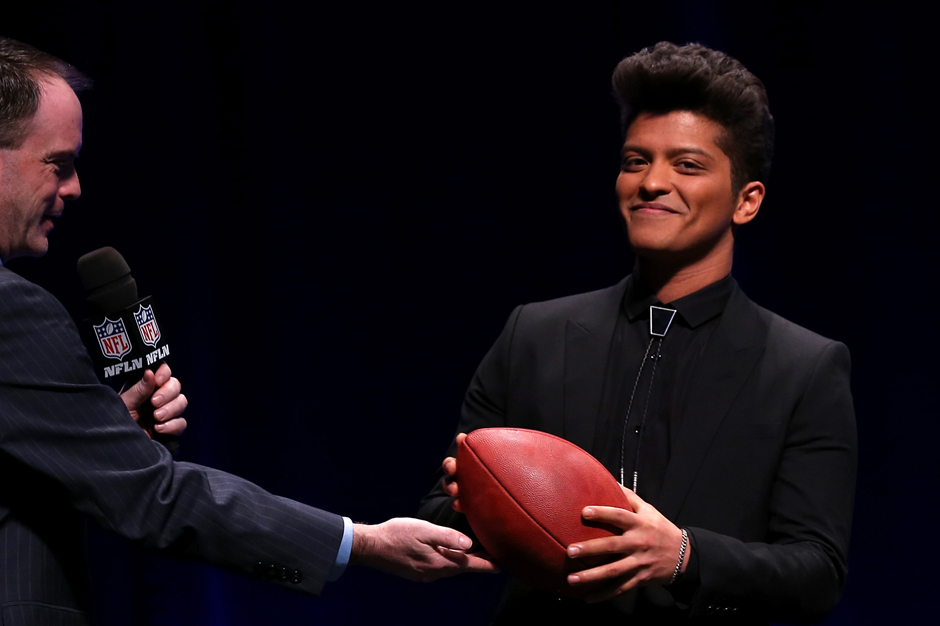 Super Bowl XLVIII comes to New Jersey’s MetLife Stadium this Sunday, matching the Seattle Seahawks against the Denver Broncos. Since those two teams hail from the first two states in the union to legalize marijuana for recreational use, this year’s Big Game has already been lovingly dubbed “Weed Bowl.” Of course, if you’re watching in person, that name’s purely honorary (enjoy that Bud Light!). But if you’re watching from the comfort of your own home … Look, all we’re saying is there’s gonna be a whole bunch of music, and some really funny commercials, and SPIN’s already gone through the trouble of mapping all of that out for you right here. BYO snacks.

Bruno Mars has long been booked to lead the official Halftime Show, and though he may be an Unorthodox choice, we suspect the man’s Jukebox will be stocked with some surprises. After all, the guy hand-picked Red Hot Chili Peppers to play, and the Los Angeles funk-punk posse have been trolling the world with Zeppelin references and dick jokes ever since. Even if the former Elvis impersonator plays it straight, he’s got a lot of foil in the mix already.

In a Goldilocks-inspired ad for Dr. Dre’s new Beats Music app, Ellen DeGeneres is a home intruder on the hunt for the perfect playlist. Papa’s choice is too heavy (Black Sabbath’s “Paranoid”) and Mama’s selection is too country (Brandy Clark’s “Stripes”). Meanwhile, the teenager is an EDM fan — enter Dillon Francis’ “I.D.G.A.F.O.S.,” which inspires Ellen to bust out a few moves. We won’t spoil the ending, but it turns out that Aloe Blacc’s “Can You Do This” is juuuuuust right.

3. Buncha Bands Brought to You by Bud Light

There’s an aircraft carrier, and a hotel, and everything is heated but none of that matters much because you’re probably not going and that’s totally fine. Bud Light is streaming its nightly concerts live online. Friday night’s headliners are Imagine Dragons, fresh off of their Grammys rap-rock explosion. Saturday night’s lineup includes Foo Fighters and Zac Brown Band (a collaboration is inevitable). And Sunday it’s Fall Out Boy and Jake Owen.

4. Dr. Teeth and the Electric Mayhem Hit the Road

The Muppets’ very own Ken Kesey-inspired psych-rock band wind up catching a lift from a decidedly straight-laced Terry Crews (a.k.a. Major Lazer in the flesh) after their trippy van breaks down by the side of the road. Here’s a sample of the Toyota-funded mayhem to come:

5. Queen Latifah and America and a Choir and Helicopters!

From Wikipedia’s Super Bowl XLVIII entry, because we can’t improve on the bare facts here: “Before the national anthem is sung, Queen Latifah and the New Jersey Youth Chorus will sing ‘America the Beautiful.’ A V-shaped formation of three Black Hawks, three Apache attack helicopters, and three Chinook heavy-lifters will do military flyover timed with last note of the song.” Now we know why Bud Light brought an aircraft carrier to a football game.

6. Reggie Watts DJs in a Limo

This musically inclined comic seems to be everywhere these days, whether hosting the inaugural YouTube Music Awards, or composing the theme song for, like, every single show on Comedy Central (to which we say, NOICE!). But for this year’s Super Bowl ad onslaught, he’s part of what appears to be a decidedly gonzo Bud Light series that includes Arnold Schwarzenegger as a ping-pong genius and Don Cheadle playing master to a llama se llama Lily.

I mean, it’s the first time an opera singer’s been given the honor. So, that’s something.

We first discovered this Canuck Lillithist’s comedic chops watching Portlandia (no Fred and Carrie in this year’s batch of ads?) and now Sarah McLaughlin makes a clutch cameo in Audi’s insane commercial about an untested, terrifying, and hopefully impossible designer dog dubbed the Doberhuahua.

10. Um, Pre-Gaming With the Band Perry and Phillip Phillips

In contrast to CBS’ 2013 pre-game lineup, FOX really could give a shit about music. Like, they booked the Band Perry and Phillip Phillips to liven up their 2 p.m. to 6 p.m. (ET) schedule, which includes some history, a little behind-the-scenes, a must-see interview between Bill O’Reilly and President Barack Obama, some other football stuff, and a reading of the Declaration of Independence, because America. Oh, that’ll be accompanied by a new patriotic banger, “Heart of Independence.”