Like the legend of the phoenix, the Russian Police Choir’s performance of Daft Punk’s “Get Lucky” has risen once again. This time, the group reprised its Opening Ceremony cover for NBC’s Today live from Sochi. You can watch Al Roker enjoy the heck out of that moment on the special NBC Olympics site. Ironically, the same men singing “We’ve come too far to give up who we are,” are the same theoretically tasked with ridding their nation’s streets of “gay propaganda.”

It is for that exact reason and other institutionalized human rights violations therein that Blondie rejected an invitation to perform at the 2014 Winter Olympics. As The Hollywood Reporter notes, Debbie Harry hit Twitter over the weekend to share a scan of an offer letter promising the band a 45-minute set on the same stage where the athletes receive their medals each night. Scrawled in thick black marker over the top are the words, “PASS” and “HUMAN RIGHTS.”

Madonna and Elton John are among those who’ve criticized Russia’s discriminatory policies. Most recently, Russian Orthodox church leader Patriarch Cyril shared his abhorrent thoughts on gay marriage with Russian wire service Interfax: “Never before in the history of humankind, was the state law used to justify sin. Even the pagans didn’t have anything like that, although the pagans’ understanding of sin was very vague.” Latvian band Brainstorm will replace Blondie.

Thankfully, there’s another moment of muso-Olympian synchronicity that’s free to enjoy regardless of your stance on modern Russian policy. Fans of the competition will no doubt remember Evgeni Plushenko’s 2001 strip-tease routine (fake muscle suit and all) set to Tom Jones’ “Sex Bomb.” Well, now a genius YouTube user has uploaded the footage soundtracked by Ginuwine’s “Pony,” via Noisey, and it’s awesome. Hit play above if you’ve somehow avoided doing so already. 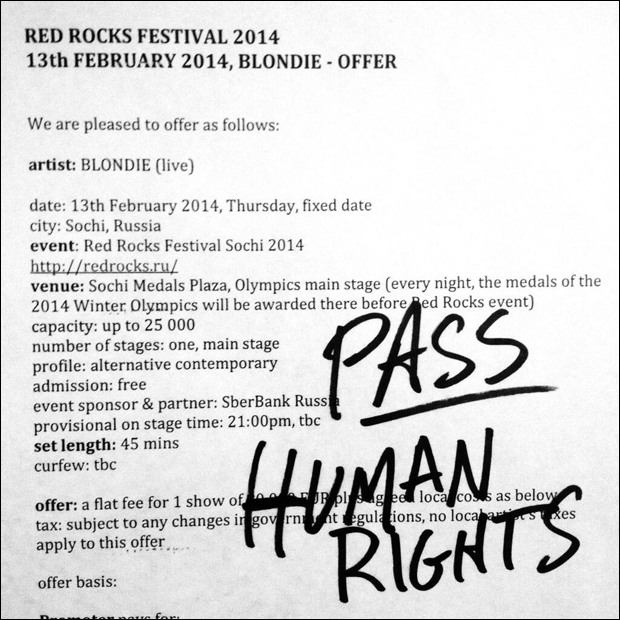