With a guestimate of 1,789,579 bands (give or take) attending Austin’s South by Southwest in March, it’s easy to forget that the event also includes an entire film festival. A tech one, too, but the movie lineup has just been announced, and Billboard has handily broken down the music-related films set to play. Many of them are U.S. or world premieres, including the Jimi Hendrix biopic starring Andre 3000, and documentaries on A$AP Rocky and Swedish House Mafia.

All Is by My Side is John Ridley’s drama about the legendary guitarist — it’s gotten mixed reviews outside of the States, but in light of the OutKast excitement, it can’t help but be a must-see. SVDDXNLY digs into the daily grind of a certain gold-grilled Harlem MC and his A$AP Mob, with input from Wiz Khalifa, Macklemore, Snoop Dogg, Kathy Griffin, Jeremy Scott, Rihanna, and others. Christian Larson’s Leave the World Behind tracks the waning days of one of EDM’s biggest groups.

Super Furry Animals leader Gruff Rhys is making his co-directorial debut with American Interior, a film that blurs fact and fiction while exploring the story of a Welsh-speaking Native American tribe. Jon Lefkovitz’s Rubber Soul reconstructs two interviews with John Lennon and Yoko Ono to tell their story and artistic journey. Gary Fortin’s Road To Austin fittingly digs into that Texan town and asks how it came to be the “Live Music Capital of the World.”

Other promising picks include: Florian Habicht’s Sheffield: Sex City, on Pulp’s relationship to their hometown; Beth Harrington’s The Winding Stream, which examines country’s royal clans, the Carters and the Cashes; Doris Dörrie’s Que Caramba es la Vida, which digs into mariachi culture through female eyes; George Hencken’s Soul Boys of the Western World, about Spandau Ballet; and Martin Shore’s Take Me to the River, in which Stax Records legends mentor young musicians. 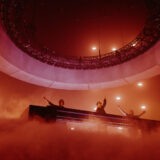 For more info, search by title via SXSW.