It doesn’t take long to realize that Frank is something special. When Leonard Abrahamson’s fantastical black comedy kicks off, we hear what seems like standard soundtrack fare: a quaint little ditty about the sea playing over a shot of waves crashing on an Irish beach. But when the singing stops short and shifts gears to what’s next in the frame, we quickly infer that we’re inside the head of Domhall Gleeson’s Jon, a hopeless, aspiring songwriter attempting to squeeze inspiration from his drab surroundings. A woman passes pushing a stroller, and we hear a feeble new song: “Ladies with babies … that’s … how it works?”

But Jon’s fate is soon to change in this loving tribute to outsider music and the avant-guardians who find themselves awkwardly bathed in limelight. The movie takes a chance in casting handsome A-lister Michael Fassbender as the titular savant — Frank wears a huge papier-mâché head at all times. He sleeps in it. He showers in it. And when he’s onstage, he plugs the microphone jack right into his fake face. Jon becomes a member of the man’s band when he happens to witness the keyboard player’s attempt to drown himself in those same breakers. SORONPRFBS has a gig in town that night, and they need a (pair of) hand(s).

“Can you play C, F, and G?” the group’s deranged manager Don (Scoot McNairy) asks Jon while the last guy gets carried off on a stretcher. “You’re in.” One thing leads to another and our wide-eyed wannabe is kidnapped, essentially, and taken to a remote country cabin where he gets to know the rest of the band as they attempt to record an album. Maggie Gyllenhaal is hilariously terrifying as the severe, theremin-wielding Clara. François Civil is Baraque, the guitarist who refuses to speak anything but French. And Autolux/Jack White drummer Carla Azar plays a silent skin-smacking Moe Tucker-type. 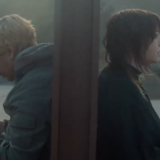 As fun as it is to observe these amazing indie caricatures, the real action happens between Jon — forever a fanboy, documenting the group’s every erratic move on Twitter, YouTube, and Tumblr — and Frank, a man who actually can turn circumstantial minutiae into profound poetry and beautiful song (re: “Carpet Tuft”). The social outreach helps SORONPRFBS find their fan-base, but the attention is an X-factor that these musicians, who stake their pride on unpredictability, handle to varying degrees of utter failure. The biggest effect is on Frank, whose character balances on a seesaw of messianic myth and mental illness.

Director Abrahamson was inspired by artists like Daniel Johnston and Captain Beefheart, and the film is dedicated to late musician/comedian Chris Sievey, whose nearly identically masked Frank Sidebottom alias delighted and confused English audiences in the ’80s. In fact, Frank co-writer Jon Ronson was a keyboardist in Sidebottom’s Oh Blimey Big Band. Perhaps that’s the reason that for all the on-point parody and gallows humor, there’s a real sweetness running through Frank, a film that pokes at the heart of the creative spirit and perhaps shames us just a little for being gawking voyuers in the face of offbeat greatness.