"We lose the most. We lose the trust of our fans because of innocent naiveté [and] ignorance." 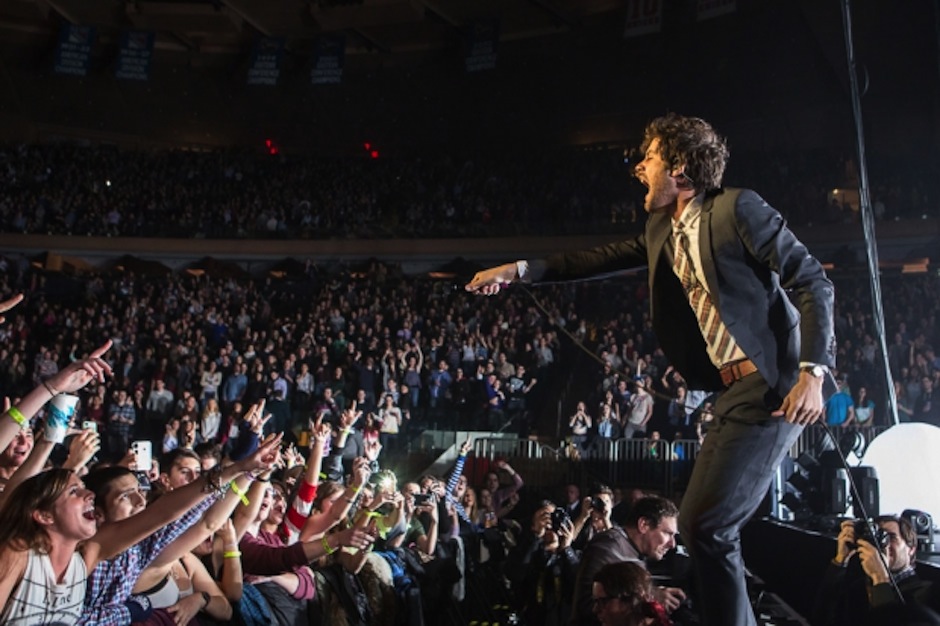 Let’s say you’re in a band. A pretty successful band. Sometimes, due to factors beyond your control, you’re forced to cancel shows. It happens. Not everybody’s Cal Ripken. But your fans, the people who pay for those shows and buy your albums — those poor, innocent souls who are ignorant of show-business realities — they’re upset when this happens. You know who the real victim is? You. But you’re really, really sorry and thanks for the support, mmkay?

Passion Pit, who have had to cancel some shows recently for totally legit reasons, have posted a nearly 1,000-word letter on their website titled “Why Bands Cancel Shows (And Why It Sucks for Everyone)” (via Pitchfork). The missive lists, in great detail, four reasons acts cancel shows: general illness, mental illness, weather, and scheduling conflicts. Hey, those are the same reasons we would have guessed.

From there, the letter includes apologies and thanks, and hints at some very understandable personal situations behind any scrapped gigs. But it also says Passion Pit are the ones who “lose the most” when shows are canceled, blames fans’ “innocent naiveté” and “ignorance” for any breached trust, and calls attention to the money the band loses when it scratches tour dates. “Trust us, we’re the most disappointed,” Passion Pit write.

With all best wishes to the Gossamer group for their health and future live shows, an apology that presumes fans’ lack of knowledge and winds up with yourself as the real victim is tone-deaf to say the least. To say the most requires whole new phrase: “bandsplaining.”

WHY BANDS CANCEL SHOWS (AND WHY IT SUCKS FOR EVERYONE)

We try to be very forthcoming about information regarding touring. However, sometimes it feels as though it just backfires. But we understand the confusion. We try to remain very positive, open, and incredibly apologetic to everyone who bought tickets in advance only to have to get refunded with no show. All of us being big fans of music our entire lives, we know how much of a bummer it can be, and it upsets us greatly because we truly empathize.

It’s been hard to sit back and realize that people really don’t understand how complicated it can be canceling a show, or how detrimental, even.

There are many reasons bands or artists cancel shows. Here are a few of them, many of them have applied to us:

1) General Illness. Though many bands play through illness, sometimes it’s absolutely necessary to take a night off to ensure that the rest of the tour survives instead of beating your body up only to have to risk canceling more shows in the future. This is how so many singers lose their voices, or people develop long-term illnesses. It’s just not worth it.

2) Mental illness. Most of our fans know about my condition but this only hurt us a few times, and it was well over a year ago, and I work my ass of to make sure I can get out on stage and tour. More on how we made up all of these shows later.

3) Weather. Outdoor stages that are built into muddy grounds have caused death (so many examples of this). Rain and electronics, as we all know, also really don’t mix. Sometimes, other stationary stages are said to be “rain or shine” but do not actually have the capability of fully protecting the gear. As some of you may know, we lost SO much gear and money a few weekends ago due to a storm, and we’re not about to mess it up on our final trek for “Gossamer.” That could potentially end an entire tour and then that’d be it. No more touring. See you maybe in 2014. Not fun.

Another weather issue is that if it rains, the amount of gear we use to play proper Passion Pit shows is not only put in jeopardy but so is the entire band and crew that manage the 60-75min show. Our system is very complicated, hand-built, and utilizes synthesizers and gear that has been customized for the show we pay money to put on and you pay money to see. It is not in our fan’s best interest or ours to compromise this. We did it once, we DJ’ed a few times, just to stay positive, and we mostly just got heckled, even just for trying. So, we learned our lesson: damned if you do, damned if you don’t.

4) Conflicting schedules. There are many things that happen on the road that are scheduled that are not made public because it is no one’s business. Clearly, it must be something serious enough to merit losing money to clear a show. We do not take this lightly and because we all have private lives, certain things are unavoidable and some people will simply be left with a statement that doesn’t fully satisfy. We’re sorry, but we are entitled to our privacy to a certain degree. This is one of the most frustrating things that you cannot always predict, which brings us to my final point.

We lose the most. We lose the trust of our fans because of innocent naiveté, an ignorance in regards to how these things are done. WE lose the trust of those who don’t understand how many people are involved in our show, from our touring crew to local crew, how much planning goes on for months and months to prep, how much money is spent to keep the tour rolling, and how much we need to tour to make sure we can afford to put on the show we want to do and still end up being able to pay our bills and continue to do this for a living.

We actually HAVE played in the rain before. Many times, actually. But the stages have been covered and we’ve compromised the show. Some of those shows were amazing (it’s always raining in the UK, but for some reason they figured it out). The bottom line is that every day a band tours and doesn’t play a show, they hemorrhage money. This is a costly, tricky business, and all we want is for everything to go smoothly and to have fun. But tour doesn’t always work that way and we apologize for things that are completely out of our control.

I want to close this chapter now and remind people that we have made up all of the shows we had to cancel in 2012, save for the Apollo Theater in NYC for our CD release show. I was in a hospital, kind of hard to get out of that one.

For 2013, we’re now forced to take losses in these situations as we moving towards finally getting real time off and prepping a new record to continue doing what we do.

Please understand that if Passion Pit cancels a show, it’s canceling a show for a damn serious reason, and we’re not messing around with our fans. We’re trying our hardest and we are so sorry for the inconvenience. There’s only so much we can do.

Thanks to all of you who have been understanding and we very much look forward to making up these shows to you at 100% next time around. There’s no better remedy than an amazing show.

Trust us, we’re the most disappointed.