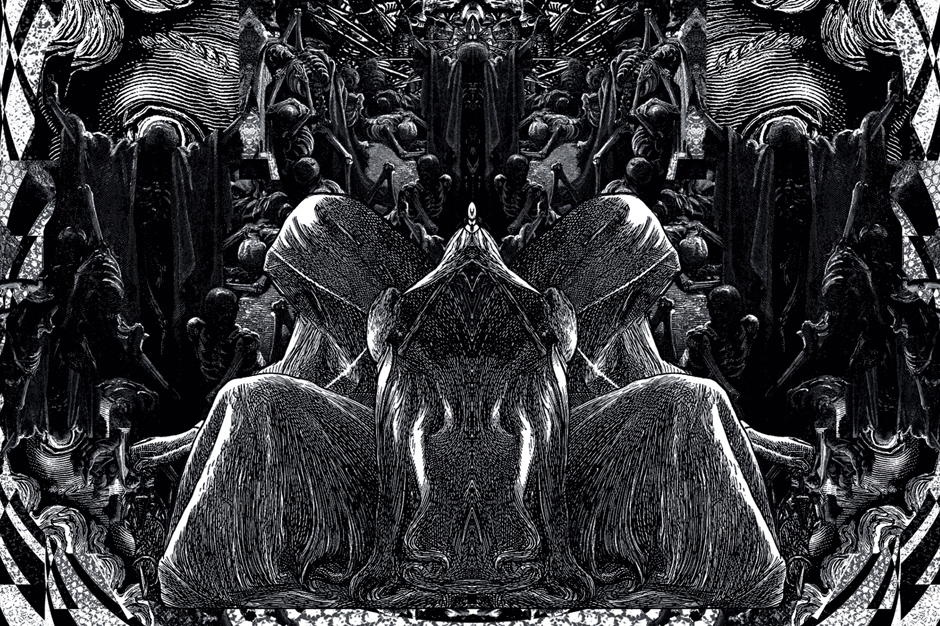 New Jersey’s Parallel Thought is more than just a couple of fellas composing funk-fueled horror-score bangers for atypical MCs like Del the Funky Homosapien and Gene the Southern Child. It’s a label too, home to 3:33 — an anonymous group who create brutal drone-rap instrumentals as inspired by the avant-garde work of John Cage and the tradition set forth by D-Styles on his Phantazmagorea classic.

On October 29, the crew drops their most ambitious set yet: Bicameral Brain, a double album that comes with a concept of sorts. As laid out by Parallel Thought LTD, 3:33’s creative process took them to a place where, “One side spoke commands in the form of auditory hallucinations and the other listened and obeyed.” Apropos, SPIN is proud to premiere not one, but two songs from the 25-song collection.

First up is “BB-2,” a drum-crushing beat-dirge awash in pestilent atmosphere and enriched by mumbled mantras. The claustrophobia induced by the track is a very real thing, even if the music is beautiful in its own wonderfully weird way. And the second share is “BB2-8,” a seven-minute sprawl that features primitive percussion, eerie ambience, synthesized strings, and digital discomfort, ending in a nightmarish smear.